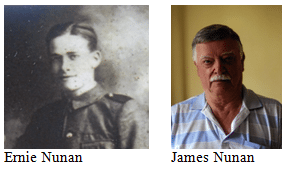 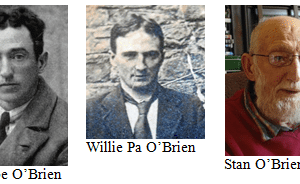 Thomas Murray did not speak about his activities during the 1916 Rising, his son Desmond explains. The Murray family lived in Gardiner Street, but because of the many raids on the house they had to relocate on several occasions. Fintan Murray states that their father took part in the War of Independence, though this is not borne out in Thomas Murray’s statement to the Military Pensions Board. He left the Irish Volunteers in 1917 and was not active during the Civil War. Thomas Murray was a bookbinder and his brother James worked in the printing business. Two other brothers, John and Bernard, worked for Archers butchers in Parnell Street. Thomas worked at Cahill’s in Drogheda for a time after the Troubles and he married Margaret Mc Conville there in 1927. Later, he was employed by Ormond Printers in Dublin. He served in the LDF during the Emergency. Fintan recounts an anecdote relating to the Murray home on Newgrange Road in Cabra in 1931. Gráinne Ní Mhuirí explains that her grandfather, Thomas, was in 2nd Battalion E Company Irish Volunteers under commanding officers James Connolly, Thomas Craven and Oscar Traynor. The battalion was based at Jacob’s Factory, but owing to the confusion resulting from the Countermanding Order, Thomas was to fight in the GPO during the Rising. Desmond explains that his uncle John told him that both Thomas and James Murray had guns. In his witness statement Thomas Murray said that he saw action at Annesley Bridge in Fairview but was brought to the GPO on the Tuesday under Oscar Traynor. Prior to the surrender, the men tunnelled from the Metropole Hotel to the corner of Abbey Street (Manfield’s Boot and Shoe Company). Having been burnt out, they returned to the GPO and retreated into Moore Street. Thomas Murray was arrested and held overnight at the Rotunda. He was sent initially to Stafford Prison and then to Frongoch in Wales. He was released on Christmas Eve 1916 and arrived back in Dublin on the following morning. Desmond explains that Thomas served his time as an apprentice bookbinder with Cherry and Smalldridge, and completed his apprenticeship on Good Friday 1916. His employers were unaware of his membership of the Volunteers. Fintan explains that his father took part in the 1913 Lockout and later became a strong trade unionist. He was a founder member of the Irish Bookbinders and Paper Rulers Trade Union (founded in 1920). From 1936 it became known as the Irish Bookbinders and Allied Trades Union. The family pride in the role their father played in 1916 is considerable. John Murray was a quiet man, his nephew Fintan explains. Another uncle, James (Jim) Murray, was a stereotyper and he and his brother John were in Croke Park on Bloody Sunday and managed to escape. During the War of Independence, Thomas was working at Cahill’s Printers, and Desmond recalls what his father told him about that time, including a description of the activities of the Black and Tans. Thomas Murray received a medal and applied for the military service pension. Gráinne discusses her grandfather’s pension application which covers the period from late 1915 to 1917. A witness to this application was Michael Colgan, general secretary of the Bookbinders Union and later a member of Seánad Éireann. Gráinne reads from Colgan’s statement with reference to the role played by Thomas Murray. Fintan explains that his father would not take up arms against an Irishman, which was the reason why he did not take part in the Civil War. He was a supporter of Michael Collins’s position. Gráinne describes her grandfather’s attempts to gain employment from 1917 onwards, and she discusses the possible reason why he did not remain in the Volunteers. Desmond remembers the hard times in the 1930s and 1940s, and going with his father to collect the pension every month from the Bank of Ireland on College Green. A group of comrades (Cumann Óglaigh na Cásga, 1916/Associated Easter Week Men) would meet at 7 Eustace Street and he remembers attending these gatherings with his father. He also recalls accompanying his father to Kilmainham Gaol before the restoration, and discusses his memory of the torture room and the padded cells there. Thomas Murray’s 1916 medal is in the keeping of the Murray family. Desmond recalls a small oval badge which his father always wore. At any commemoration or 1916-related event he would wear a green and orange armband. He died in October 1962 and is buried at Glasnevin Cemetery. His gravestone inscription notes his role in the Rising. Thomas was a supporter of the Labour Party initially, but when Fianna Fáil supported house building around Dublin city, he transferred his political allegiance, Fintan explains. However, he always admired Michael Collins. His friends Mick Colgan and John Kinsella are remembered. Desmond discusses his father’s career as a bookbinder and the printing companies around Dublin city, and says that most of these companies had English or Protestant owners. Gráinne examines a letter from the Easter Week Memorial Committee from 1936. She refers to the Federation of the Old IRA Associations. She reads from an article in An Cló (the Irish Print Union magazine) written in 1991 by her father, Séamus Ó Muirí, on the 75th anniversary of the Rising. The article relates to the setting up of the Bookbinding Union in 1920. Printers and bookbinders who died in 1916, and those who took part, are mentioned. The work of the three printers who produced the 1916 Proclamation document at Liberty Hall is remembered. Desmond remembers attending an occasion in the Bookbinders’ Hall in North Frederick Street with his father and his brother James (Séamus). He recalls that while they, the younger men, were supporting the activities of the IRA, their father did not. He says that the atrocities committed by the IRA during the Troubles in the 1950s were never supported by Thomas Murray. ubject: Ernie Nunan (Interviewee’s father), Seán Nunan (Interviewee’s uncle), James Nunan (Interviewee’s grandfather).