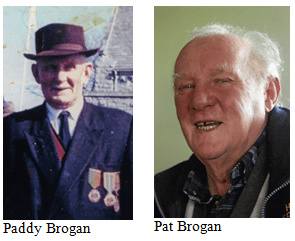 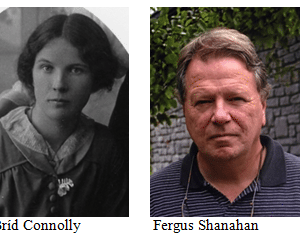 Mícheál Ó Colmáin, father of Donal Ó Colmáin, was the brother of Richard Coleman who was involved in the 1916 Rising. He was second in command to Thomas Ashe in Swords, fought in the Battle of Ashbourne and led a group of 20 men to the GPO. Donal examines a printed prayer for Richard Coleman, later a prisoner in exile, and Ciara Ó Colmáin explains that this would have been handed out on the day of her granduncle’s funeral in December 1918. Donal grew up in Clonsilla in Co. Dublin. His Donegal-born mother worked as a teacher there and his father was a civil servant, working for the Land Commission at Merrion Street. His grandfather, Thomas Coleman, was a schoolmaster in Swords. Donal explains that his father passed the British Civil Service examinations prior to Independence and worked initially at the Admiralty in London before his return home. Thomas Coleman died in 1916 and Donal remembers his grandmother as a widow in Phibsboro, where she lived with two of her daughters. He does not recall his father speaking about his brother, Richard Coleman, who died in a British prison in 1918, and he explains that when he was young, those times were historical to him and his siblings. He was not very aware of the family connections but does not believe that events were kept from him. Life moved on, he says. His father learned Irish with the Gaelic League in London and on his return to Ireland he attended various Irish colleges. He was a fluent Irish speaker and Donal recalls speaking Irish to him and English to his mother, though she taught Irish in school. He was bilingual in childhood as a result. Mícheál Ó Colmáin was born in 1883 and his brother Richard was born in 1890. Ciara recalls the fact that her granduncle Richard mentions his brothers in his letters, and their education was very important to him. She explains that Richard acted as sacristan while in prison in Usk. The Christmas cards designed by the prisoners are discussed – Cuimhne na Nollag – and Donal reads from another card which includes a prayer in Irish. The card also contains a list of the names of those who died for the cause in the period from 1917 to 1921, including that of Richard Coleman. Donal explains that his uncle Fred Coleman went to Usk Prison in Wales to attend his brother’s post mortem in 1918. He lists the names of the siblings in the Coleman family. Three adopted the Irish version of their surname – Ó Colmáin- while the remainder kept the Coleman name. As a result, there are members named O’Coleman, Coleman, Ó Colmáin and O’Colemane in the family. Donal discusses the Irish language and culture movement, and says that when he was young, the Protestant clergy knew more Irish than did the Catholics. Ciara remarks that the members of the family who spoke Irish got jobs in the Irish Civil Service, and Mícheál, Thomas and Risteard worked there. Donal thinks that his father was probably transferred from London to Dublin on Independence. He does not remember his father ever expressing any political views. Ciara thinks that perhaps Mícheál would not have discussed his brother Richard because he had been in an English prison. Donal’s aunts, Anna and Margaret Coleman, were members of Cumann na mBan, a fact that he discovered this much later. He recounts an anecdote relating to his grandmother. Ciara knows that her two grandaunts hid wanted men in the house, and she intends to find out more about their activities from the wider family. A plaque to their memory has been erected on the house on the Main Street in Swords where they lived until the 1980s. Donal reads a letter addressed to Mícheál Ó Colmáin and dated November 23rd 1921, written in Irish from Cathal Brugha, Minister for Defence in Dáil Éireann. The obituary written following the death of his father Mícheál is read by Donal, and it provides interesting details about the Coleman family. He recalls the fact that his father had a lifelong friendship with Sinéad Flanagan, later Bean Uí de Valera. Ciara discusses Mícheál’s role in furthering the cause of the Irish language. Donal recalls the burial place of his great-great-grandparents in Cloghran, and his Murray grandmother’s parents who lived and taught at the schoolhouse there.