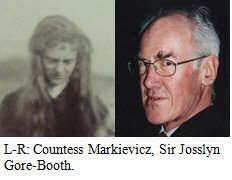 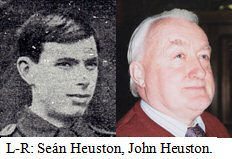 Track 1: Explains the Fenian background of the Henderson family and of Fr. Éanna Henderson’s maternal Brennan family – his mother was involved in 1916. Track 2: The period from the Lockout in 1913 to the Rising in 1916 is discussed. Fr. Éanna explains that his father told him that James Connolly was the person involved in the Rising whom he most admired. Mention is made of Dick McKee who was also involved in the Rising and who remained friendly with Frank Henderson. McKee was killed during the War of Independence. Track 3: Frank Henderson’s home in Sherrard St., Dublin, is described, together with the use of the house as a centre for republican planning. Track 4: Fr. Éanna recalls the visit to Mount Saint Joseph Cistercian Monastery in Roscrea of Nurse Elizabeth O’Farrell, and their discussion of the iconic photograph taken at the surrender of P. H. Pearse after the 1916 Rising. There follows an account of his father Frank Henderson’s time in the GPO during the Rising, of his mother’s visit there with food supplies, and the great responsibility Fr. Éanna has always felt about keeping the details of that time clear in his mind. Track 5: The surrender at the end of the Rising and its aftermath are described in detail, including the march up Henry Street and the night outside the Rotunda. Track 6: Fr. Éanna Henderson recalls his grandmother’s family from Armagh, and their connection to the Manchester Martyrs. He discusses his father’s support of de Valera, and his uncle Leo Henderson’s involvement in the Civil War. Tracks 7-8: Fr. Éanna shares his views on his father’s involvement in the 1916 Rising, his own opinions on Michael Collins, and memories of the testimony provided by Frank Henderson to Ernie O’Malley. He explains his own decision to deposit his and his family’s collection of historical memorabilia and papers in the Kilmainham Jail Archives.