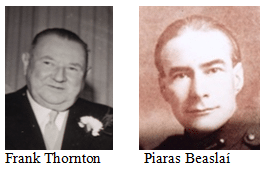 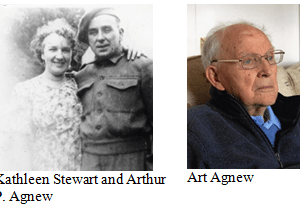 In 1980, Robert Woods recorded details of his aunt Patricia Proctor’s memories of her childhood in Dublin city. Robert explains that he recorded and filmed his aunt on video camera and the audio element is included in this recording. Born on March 5th 1904, Patricia Marjory Woods was the youngest child of Sir Robert Woods, a well-known surgeon. They lived at 39, Merrion Square in Dublin. She went to school in England, Roedean near Brighton, and had to make difficult and dangerous journeys to get there. She remembered vividly being caught in an air raid while being under the glass roof of Victoria Station and the sea sickness on the Mailboat. After the Mailboat was sunk her parents sent her to Alexandra College in Dublin and she was there when the Easter Rising took place. It took her 3 hours to get from the school in Earlsfort Terrace to home in Merrion Square. She had to dodge round back streets, crossing and re crossing the canal. Advised and encouraged by soldiers and civilians she finally made it to the back lane where some kind lad scaled the back wall and let her in her own back gate. The next door house had been turned into a hospital and there were snipers of all persuasions dodging about among the chimney pots. Going up to bed one night she was very frightened to see a pale face pressed against the skylight on the stairs Patricia Woods speaks about her family. Her grandmother’s family in Tullamore are listed and details are provided about their marriages. One of Patricia’s aunts was grandmother to Ernest Walton, the scientist who first split the atom, for which he was awarded a Nobel Prize in physics. Patricia recalls her parents. Her father was born in Tullamore. He studied medicine in Dublin and in 1893 he began to practice as a doctor in the city. It was through his interest in singing that he met his wife Margaret Shaw. Patricia recalls in great detail the family home in Merrion Square and life in the vicinity during her childhood there. Her father was one of the youngest members of a large family. Patricia was very familiar with his youngest sibling, Annie Nicholson, as she had stayed with her when her parents went abroad. She also speaks about her mother’s family. Her maternal grandfather, James Shaw, is recalled fondly. Her two uncles, James Rowan Shaw and William Maxwell Shaw who was awarded a DSO, both died in WWI as did her eldest brother, William Thornley Stoker Woods. Patricia explains that her mother’s parents were from the Ards peninsula and James Shaw was a law lecturer at Londonderry where her mother was born. The family moved to Dublin when James Shaw was appointed to the Whately Chair of Political Economy in TCD (1877 to 1882), and Patricia recalls his work in various locations as a judge, such as Kerry and Belfast. As a girl, Patricia had wanted to get a qualification and a job but her Father said that, “As long as I can support you, you are not going to take the bread out of some poor person’s mouth” (there was very high unemployment in the hungry 1930s). She travelled extensively and later she began to train as a nurse but then met a young Church of Ireland clergyman named Cecil Proctor and they married. Having worked for a year in Ceylon, the couple settled into parish life in Harold’s Cross Church, where Proctor was Rector for many years and Patricia assisted him in his work. Robert remembers living in the house in Merrion Square as a child. In 1952, he and his family moved from the Square when the house was let out as the British Embassy, and twenty years later in 1972 he stood outside the Embassy and watched as the Woods’ former family home was engulfed in flames.