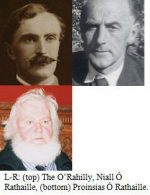 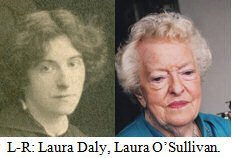 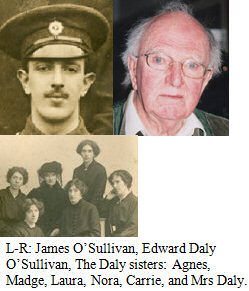 Track 1: Proinsias Ó Rathaille describes his father Niall Ó Rathaille’s early life, his time in America and his return to set up his medical practice in Herbert Park in Dublin, in the O’Rahilly home where Proinsias was born. He provides his own views on events of the weeks before the Rising in 1916. Track 2: Proinsias describes the responsibilities of his grandfather, Michael Joseph O’Rahilly (The O’Rahilly) in the GPO during Easter Week. He also recounts the attempted retreat from the GPO, and the shooting and death of The O’Rahilly in Sackville Lane. The note he wrote to his wife, Nancy, as he lay dying is also detailed. Track 3: Michael Joseph O’Rahilly’s Kerry connections and the home he built in Ventry, still used by the family, are described, as also is Dillon Lodge in the Dublin Mountains. This was a present given to Proinsias’s mother, Bridie, by Joe McGrath. Track 4: The O’Rahilly family’s response to the death of The O’Rahilly and their political stance over the years are explored. Track 5: Proinsias Ó Rathaille recalls his mother, Bridie Clyne, originally from Leitrim, who was involved in the 1916-1923 period. Bridie was on hunger strike in Kilmainham in 1923 under the alias Annie Hardwicke, along with her friends, Sighle Humphreys and Elgin Barry, who later married a member of the O’Rahilly family. The O’Rahilly family memorabilia and military medals are examined and discussed.