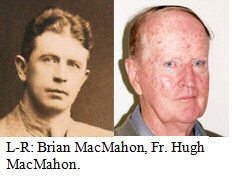 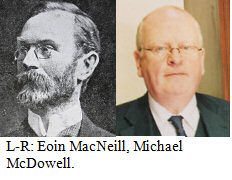 Track 1: The McNally family background in Lusk is set out, and Jack McNally’s joining of the Fingal Brigade of the Irish Volunteers and his position at a top window of the GPO during the 1916 Rising, are also described by his son Séamus. The retreat from the GPO, and Jack McNally’s escape, having been close to The O’Rahilly in Moore Street, are discussed. The order given to the men in Ashbourne to come into Dublin early in Easter Week, and their journey there by bicycle, are also recalled. Track 2: Contains an account of the teaching by Tomás Ashe in Corduff National School near Lusk, and his pupil, Jack McNally, who joined Ashe’s band. Also contained is a story of the raid on the McNally home by the Black and Tans, and the stealing by them of Jack McNally’s beloved fiddle. The fact that Jack McNally played at Tomás Ashe’s funeral is also recalled. Track 3: Séamus McNally recalls his mother, Jubilee Nurse Annie Thorne, and her work in the Fingal area. Séamus’s wife, Mary, displays some of the McNally family memorabilia. It is explained that Jack McNally’s testimony was not included in the Bureau of Military History records. Track 4: Mary McNally (née Hogan) recalls stories of her future husband’s family who lived opposite her family home, and being told of the day that Jack McNally left for Dublin early in Easter Week, and his father’s grief at his departure. Track 5: Memories of Tomás Ashe are discussed, including his organisational and leadership skills and his inspirational character. Track 6: The Black Raven Pipe Band, formed by Tomás Ashe and continued after his death, is recalled as it performed locally during the 1930s. Memories are shared of Séamus’s aunt Margaret, who brought him up following the untimely death of his mother, and of her social work in the area. Tracks 7-8: At the end of the 1916-1923 period, Jack McNally settled back into his former farming life in Lusk, loving his card games with friends. His work and leisure times, from then onwards, are recalled by his son.