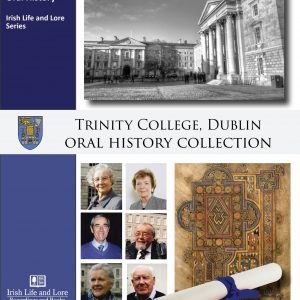 Track 1: His background in Dublin, and his parents’ influence. Track 2: His early education, and his entry to Trinity in 1951 as an undergraduate, to study history. His lecturers and his respect for Professor Lyons. Track 3: His work at Magee College in Derry from 1959-1965, and his involvement with the University for Derry campaign. Track 4: His interview for a position as History Lecturer at Trinity, and his subsequent employment there. Track 5: The changes brought about in teaching practices and the curriculum. Track 6: His father Austin Clarke, his poetry, and the changes in his political views over his lifetime. Track 7: His retirement in 2001, and continuing involvement with Trinity, remaining a Senior Research Fellow until 2010. His publications over many years, and the high points in his life. Track 8: His membership on the Board of Trinity College, and the positions he held.