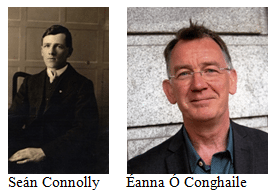 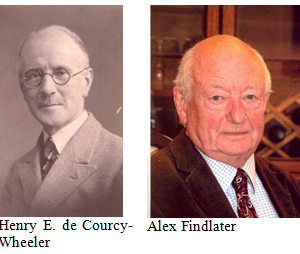 Patrick Vincent Coogan was born in 1890 and grew up in Ballyraggett in Co. Kilkenny, a member of a large family. He studied at UCD and qualified as a secondary-school teacher. In about 1913 he became a member of the Irish Volunteers A Company 1st Battalion and served under Ned Daly with the Four Courts Garrison. Declan Coogan has researched his family history and he explains that his great-grandfather, William Coogan, was a shopkeeper and farmer. All of his children were to attend university. Patrick graduated in 1918 and moved to Athlone to take up a teaching position. Declan explains that Brian Lenihan Snr. Was in his father’s class in school. Declan has his grandfather’s record of his movements during the 1916 period, and he reflects on the nationalist mood which was building at the time. Patrick signed up on the foundation of the Irish Volunteers. When the Rising began he thought that his company was drilling and was surprised to discover that the Rising was in progress. Declan explains that his father Patrick’s description of his own father was that of a thin man with poor eyesight. From his grandfather’s account, Declan describes his movements during Easter Week. On the Monday he was mobilised from his lodgings at Ardilaun Villas and met with his Company at Colmcille Hall on Blackhall Place. After the Proclamation was read there by Ned Daly, the men moved to Church Street to take up position. Patrick was on guard duty at North King Street throughout the night. Declan discusses his grandfather’s escape on the day of the surrender in 1916, when he and another man were hidden in the basement of his house by Fr O’ Callaghan and were given suits of clothes to assist in their escape. He remembers his father telling him that his grandfather had spoken of a man who died close to him on the barricades. At one point while guarding prisoners he came under fire. During this time he became unwell but rejoined the unit towards the end of the week. Declan has learned from correspondence that his grandfather bought his own gun, as did many others at the time. Declan does not think that his grandfather took any further part in the armed struggle for independence. He recalls seeing an image of him in uniform when he was a member of the LDF during the Emergency. He discusses his grandfather’s activities after 1916 when he returned to his studies at UCD and began his teaching career. He was to spend two decades teaching in Athlone and he came to Dublin with his son Patrick in the mid-1950s. Declan says that he was aware of his grandfather’s record but that just relatively recently he has revisited his family history. Occasionally he would ask his late father about his grandfather, and he is aware that he waited about twenty years to be awarded the military service pension. He lost contact with his comrades due to the fact that he was living in Westmeath, and it became difficult for him to prove his involvement. Fr Denis O’Callaghan had died by this time but ultimately it was Piaras Beaslaí’s recognition of Patrick Coogan’s involvement which sorted out the issue. He was eventually awarded the pension and his 1916 medal. He had married in about 1919 or 1920 and had settled down as a family man with a career. It is known that he was a supporter of Michael Collins and of the Treaty. Declan gathers that his grandfather was a pragmatic and cultured man rather than a fanatic. He loved both Irish and English literature. Declan and his uncle, Fr Brian Coogan, visited Ballyraggett some years ago to see the place where the Coogans originated. Historian and author, Tim Pat Coogan, is a relative, and Declan understands that Tim Pat’s father, Ned Coogan, was active in the revolutionary period but died when he was quite young. Declan remembers his mother, Beatrice, a writer who was wooed by Seán O’Casey. Patrick Vincent Coogan’s wife was an O’Connor lady from Northern Ireland. She died when her son Patrick was 19 years of age, and Patrick Vincent married again. His second wife died when Declan was very young. Declan’s maternal grandfather was Matthew Smith from Cavan who was imprisoned with Seán Lemass. Declan explains that he has learned stories about his grandparents from his mother who told him that both were involved in nationalist activities and were supporters of de Valera. He discusses his feelings about his family involvement in that period. The question of continued physical violence and its negative effect on politics is considered. The claim to an inheritance of the blood sacrifice tradition by some is problematic, he says. A discussion follows on the commemoration in 1966 when the older men looked back with pride, though also with regret. Patrick Vincent Coogan escaped capture but as a fugitive he was not always supported by his fellow men and women. The importance of the recognition of his role in Easter Week is remarked upon, and Declan feels that having got that recognition, his grandfather would now be pleased to stand at the GPO in 2016. John Coogan, father of Fr Brian Coogan, was close to his brother Patrick, and Declan recalls meeting his granduncle when he was an elderly man. Declan now has a son of his own and he is proud to explain his family history to him. His grandfather’s possible involvement in the War of Independence and the Civil War is discussed, and Declan feels that he would probably have been upset by the Civil War. The idealism and nationalism of his grandfather’s generation are recalled, and he remembers that his father said that the death of Michael Collins was very upsetting for Patrick Coogan. His teaching career over three decades in Athlone is discussed. In 1955, he and his son Patrick moved to Dublin and he taught at Belgrove School in Clontarf for a period. Declan’s mother remembers her father-in-law as a feisty man and a person of strong opinions.