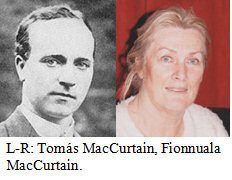 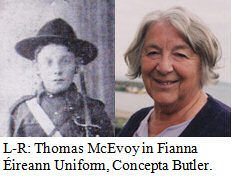 Track 1: Denis McCullough explains that he was aware of his grandfather Denis McCullough’s place in history from a very young age. The circumstances of his grandfather’s life prior to, and following, the family’s move to Dublin in 1921, and his grandmother Agnes, who was a member of the nationalist Ryan family, are discussed. Track 2: The period in the North of Ireland prior to the 1916 Rising, and his grandfather’s role at this time, are discussed by Denis McCullough. He also explains the less than positive views taken by his grandfather on the Rising, views shared by Bulmer Hobson. The character of Denis McCullough Senior, and the principles he held, are detailed. Track 3: Agnes McCullough (née Ryan) from Wexford is recalled by her grandson, who occasionally spent time in his youth living at his grandparents’ home. The pro-Treaty stance adopted by his grandparents, who would also provide shelter to anti-Treaty personnel during the Civil War at their home in Oakley Road in Ranelagh, and the personal and individual opinions held by his grandparents, are explored. Tracks 4-7: The views of Denis McCullough Senior on his duty to stand for election for the First Dáil are explained. (Dáil Éireann first assembled on 21 January 1919 following the general election of December 1918.) Mention is also made of the setting up of the McCullough Pigott business and of the New Ireland Assurance Company. Contains interviewee’s own memories of going to Croke Park to watch GAA matches with his grandfather and of meeting some of Denis McCullough’s old comrades from the North in Dublin.