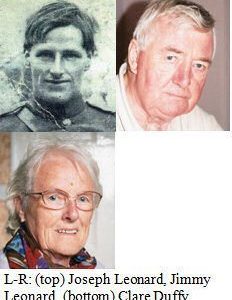 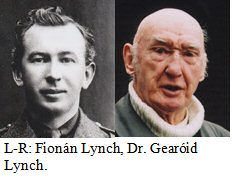 Track 1: The Lynch family of Granig, Tracton, Co. Cork, and Diarmuid Lynch’s childhood, is described. His meeting with Michael Collins in London while working in the British Civil Service is mentioned, as is the group “Friends of Irish Freedom” which Diarmuid formed in America. His holding of a senior position in the IRB, Sinn Féin and the Irish Volunteers is also explained, and his work in New York in promoting the Irish language and culture, through his membership of the Gaelic League of New York, is recalled. Track 2: Contains details of Diarmuid Lynch’s negative views on the activities of Éamon de Valera relating to fundraising for the Irish cause in America in 1920. Lynch’s presence as Staff Captain with Thomas Clarke in the GPO during the Rising is described, as is the fact that he was the last Volunteer to leave the GPO after the surrender. Dolores’s father, Michael Lynch, a Volunteer in Cork, was well prepared to fight until the Countermanding Order was received. His feelings about the Order are described. She also explains that the 78historical information she has acquired came through her presence at visits to her half-uncle, Diarmuid Lynch, by historians and authors. Track 3: Dolores’s schooling at Coláiste Ciarán in Cork, while she lived in Granig, is described, along with a discussion on Diarmuid Lynch’s actions as Controller of Food for Sinn Féin in the First Dáil. Track 4: Contains details of Diarmuid Lynch’s deportation in 1918 to America, following his imprisonment in England after the Rising, and his arrangement for the transportation to Ireland of the remains of John Devoy. Diarmuid and Michael Lynch opposed the Treaty, though Michel Lynch was close to Michael Collins. It is explained that this stance created a split between the Lynch and the Coveney families, neighbours of long standing. Track 5: Diarmuid Lynch married Kathleen ‘Kit’ Quinn while he was imprisoned in Dundalk Jail in 1918. (His half-brother Michael married her sister Carmel Quinn.) Dolores provides details of the day of the wedding of Diarmuid and Kit. Track 6: Contains a description of the bitterness felt by Diarmuid Lynch at his ousting from Sinn Féin by Éamon de Valera, and recollections of his close friends, including Florence O’Donoghue and General Costello. Track 7: Dolores recalls that from 1936 to 1940, Diarmuid Lynch collected material from survivors of the Rising in an attempt to produce a factual account of events. She also explains that she spent her summer holidays at the Lynch home at Granig in Co. Cork in her young days, while her family was based in Co. Wicklow, where her father worked for the Land Commission.