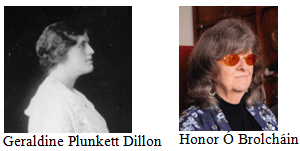 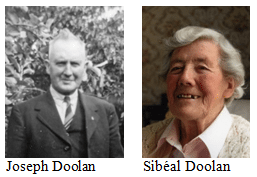 Frank Daly was born in Manor Street in Dublin, and his father James and grandfather Thomas had been members of the police force. James married Mary Behan of Dundrum and they had a large family, of whom Frank was the second youngest. The family circumstances are described by Eithne Daly, and she explains that when her father was about 3 years old the family moved to Dollymount. His first place of employment was at Inchicore Engineering Works. Eithne recalls the now demolished Dollymount Inn, behind which her father and his siblings attended dances at the Foresters Hall. He also attended Gaelic League classes in Clontarf Town Hall. In as much as Eithne knows, her father joined the IRB in 1908. Frank’s father was in receipt of a government pension, and as Frank and his brothers, Paddy and Séamus, became more nationalist they had to move out of his house. Paddy and Séamus Daly married the Gillies sisters whose family lived at 224 Clontarf Road, then known as Cluny House. Eithne recalls her father speaking of the Howth gun-running of 1914 which was organised from Cluny House, and she tells a story about the bottom of a cart collapsing on Clontarf Road while the guns were being transported. She explains that her father’s hobby was building boats at the house, and he was also adept at working with explosives. During her childhood, she remembers the fact that her father would receive people who were applying for the Old IRA pension, and her mother would transcribe the information as the people discussed their experiences. She recalls the fact that her father thought highly of Seán McDermott. Eithne describes events of 1916, explaining that meetings took place every night at 16 Parnell Square, and by the Thursday night, Easter Sunday had been set as the date for the Rising to begin. Confusion then reigned after the issuing of the Countermanding Order. Frank Daly got the order to be at the GPO between 8.am and 9.am on Easter Sunday. He cycled to Artane to call up some men and sent a person to Kinsealy on a similar mission. During Easter Week, Frank Daly was sent to blow up railway lines west of the city so that communications would be disrupted, and it appears that another duty of his was to block the King’s messenger at North Frederick Street. On the Monday of Easter Week, he was in McEvoy’s shop at No. 2 North King Street, where he met his future wife, Mary McEvoy. The couple were to marry in 1924. Guns were stored in the shop and Eithne says the premises were raided once or twice a day. The McEvoys would feed and look after anyone who called, which was important as the men could not go to their own homes. Frank was arrested at Easter Week, and he would later say that when they were being marched to a boat at the North Wall for transportation to England, some people spat at them and others threw flowers and chocolates to them. Eithne recalls her maternal McEvoy family moving from North King Street out to an area known as the Fox and Geese on the Naas Road. Her father used to stay with the McEvoys after 1922, and she explains that at some stage he got employment in Scotland. When de Valera returned from America in the late 1920s with money he had raised there, Frank was asked to install the type-presses at the Irish Press premises, site of the old Tivoli Theatre. He was always a loyal supporter of de Valera. At this time, Frank was married with a family, and Eithne recalls her father as a great reader, with a particular interest in engineering. The Treaty negotiations are discussed. Frank Daly’s brother Paddy was with Michael Collins at that time. Eithne recalls the men later discussing whether or not they should have gone, and she mentions the fact that Jack Price, Davy Lawless and Kit McEvoy said that they had no option but to go as there was nothing else to be done. Frank Daly was heartbroken about the signing of the Treaty. His brothers supported the Treaty, and Eithne discusses the attitude within the family, explaining that her mother Mary would not speak to her brother-in-law Paddy because of acts carried out during the Civil War. Paddy would call to the Irish Press to meet his brother Frank, and Eithne recalls his visit to the house to see his niece Mary. Eithne’s mother Mary was the oldest child in the McEvoy family. She and her siblings would peer out the front door letter-box of their home and Mary witnessed a British Army officer being shot in North King Street. She attended school at Kings Inn Street Convent with Rosie Hackett, and Eithne recalls the visits Rosie made to the family home. She relates an anecdote relating to an ambush set for Michael Collins, and her mother’s role in foiling this attempted ambush. Eithne recalls some of their neighbours from Collins Avenue, where the Daly family lived. Up until 1950, her father disapproved of the name given to the avenue, as he was severely disappointed by Michael Collins’s signing of the Treaty. She describes the constant talk between her parents about troubled times as a background to her childhood. She found it interesting to hear her father talk about the Troubles in the North, and she remembers his fascination with the concept of plastic detonators. A story is told relating to the use of a candle to delay the detonation of a bomb. Frank Daly died in 1976. She discusses the Daly family name, and the fact that Paddy and Séamus adopted the ‘O’ prefix to their surname.