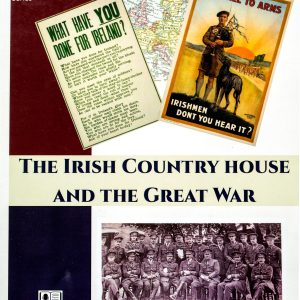 Track 1: Grania O’Brien’s grandfather, Frederic Thesiger, Lord Chelmsford, was governor of New South Wales and later Viceroy of India from 1916 to 1921. Her father, Donough O’Brien, travelled to India as his ADC and there he met his future wife, Anne Thesiger. Her father was born in 1897 and served in the Rifle Brigade in WWI, seeing action in some of the worst battles of the war. He was slightly wounded and invalided home. Grania speaks of his reticence in talking about his war experiences. He was in the reserves and was called up in WWII and served as a billeting officer in Porthcawl and in London. He became a member of the London Rifle Brigade and Grania recalls his great interest in his regiment. However, she says his main concern was always Dromoland in Co. Clare, which he inherited in 1929. The clash with his mother, Ethel, and the difficulties this brought about are discussed. Track 2: At the outbreak of WWII, the family were living in London and Grania has a clear memory of this time. Her father, being on the reserve, was called up, and Grania, her sister Deirdre with their mother Anne moved to the country to live with relatives. She speaks about the inheritance of the title by Donough’s brother Phaedrig, and later by their nephew Conor. She describes her father’s personality and details his titles: Baron Inchiquin and Prince of Thomond. Her paternal grandfather’s membership of the first Senate is mentioned. Grania discusses the position of the Dromoland estate in the area as a large employer during the Revolutionary period, and threats to the house’s safety. She recalls her grandfather’s letters with regard to cars being commandeered. Her paternal grandmother’s family in England, the Fosters, are considered. Ethel Foster was an heiress and Grania believes that she suffered due to her background in ‘trade’, but she says that her grandparents were very happy together. Grania remembers life in Dromoland and explains that most of the house staff were Protestant. She firmly considers herself as Irish and is saddened not to be perceived as such. Track 3: Grania describes the tension in the house during the Troubles of the 1920s. After WWI her parents were advised to disappear due to a threat of kidnap, and they did leave for a period of a few months. Her father’s divided loyalties to his regiment and also to Ireland are mentioned. She remembers that he was very proud to be considered as a candidate for the presidency of Ireland. Grania examines some letters in which her father described the white train in which the Viceroy of India travelled. The security precautions taken at the Dromoland estate in 1919 are discussed and she expresses her admiration of her grandparents for remaining in Ireland during very difficult times. Track 4: At the beginning of WWII it was believed that Germany would invade Britain via Ireland, so Grania and her older sister, Deirdre, were sent to Canada. Deirdre returned two years later to England and volunteered in the Women’s Royal Naval Service. Grania returned a year later and she describes that exciting journey from America in 1943. Her parents returned to farm at Dromoland about 1942 and she describes the conditions in which they lived. She recalls the occupation of the property by the Irish Army during the war and her efforts to settle into the local community. The challenges of travelling during the war between Ireland and England are described, and Grania recalls her parents’ provision for her to lead a less privileged lifestyle and her work as a secretary in England, Spain, Japan and Peru. The heavy rates levied on Dromoland and their effect on the solvency of the farm business are described. The circumstances which prevailed following the departure of the the Irish Army from Dromoland in 1946 until the sale of the property are discussed. The work undertaken by her parents in taking in paying guests from 1948 to 1960, and in marketing the house in America, is recalled. She speaks about her father’s nephew, Conor O’Brien, who inherited the title. The family connection with Guglielmo Marconi is discussed, as is her disappointment that the anniversary of the Battle of Clontarf in 1014 has not been more widely commemorated.