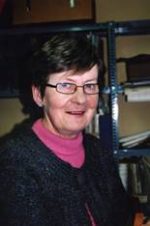 Kitty Buckley is a librarian at Cork City Library where she has worked in the music section for the past 31 years. She grew up and was educated in Carrigtwohill, later graduating with a degree in Music from UCC. She was a great admirer of Prof. Fleischmann, his mentoring and his passion for music. Kitty Buckley was largely responsible for the setting up of the music section of Cork City Library. She recalls the colourful characters who would frequent the library and the music section. She discusses the major government cutbacks during 1987 when culture and the arts were badly hit, but describes how Prof. Fleischmann was instrumental in the survival of the music library in Cork City. Kitty discusses the Cork Choral Festival and its growth and success over the years, and the wonderful legacy left to the city by Prof. Fleischmann.