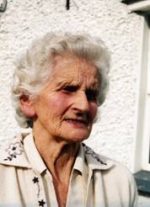 Goresbridge is the birthplace of Dolly Lennon, who at 3½ years of age went to live with her maternal aunt and uncle at Nore Cottage, Dunbell in the parish of Clara. Dolly’s father, Tom Walsh served as Fianna Fáil Minister for Agriculture for a period, and she discusses his life, his work and his relentless ambition. Dolly’s aunt and uncle Jack and Bridie Prim, with whom she lived, were a hardworking and enterprising couple. They bred cattle and sheep, and often won major prizes at the Royal Dublin Society (RDS) in Dublin. Her aunt also made and sold butter, and reared fowl and the young Dolly Lennon would spend some of her time plucking. She would also spend time travelling with a donkey and car to a distant spring well to bring home the water. Dolly’s two maternal uncles were great cricket players, as was their father. She herself was very athletic and recalls cycling long distances to watch the cricket matches, and she has fond memories of enjoying tea and barm brack at Dunbell Cricket Club on long summer days.