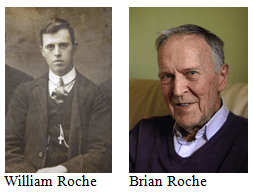 Michael Staines of Newport, Co. Mayo is the grandfather of the interviewee, Michael Staines, whose great-grandfather was a member of the RIC. He explains that when the family moved to Dublin they settled in Stoneybatter. Michael Snr. was involved in the Gaelic League at Blackhall Place, based in a premises which was also used by the Irish Volunteers. He became a member of the Volunteers at the inaugural meeting in 1913. In 1916, he acted as Quartermaster General in the GPO and he organised the arms for the Rising. His grandson describes the manner in which he moved the guns around at this time. He held the rank of Captain and was leader of the stretcher bearers when the wounded James Connolly was taken out of the GPO. After the Rising, he was arrested and sent to Frongoch Internment Camp in Wales. Staines was appointed Commandant of the camp on the 30th of June 1916 after JJ O’Connell, the previous Commandant, was transferred to Reading Gaol. In his contemporary account of life in Frongoch With the Irish in Frongoch W.J. Brennan Whitmore described Staines as: “a highly efficient officer who earned the love and respect of each individual prisoner.” On his release from interment in Frongoch, he colloborated with Éamon de Valera, James Ryan, Eamonn Duggan and others in founding the New Ireland Assurance Collecting Society, in furtherance of the Sinn Féin policy of investment in Ireland. Michael Jnr. explains that his grandfather would have known all the major figures, and following their release from Frongoch he became close to Michael Collins. He was used as an organiser by Collins in the Belfast boycott and on other occasions. One of his appointed tasks involved fundraising for the soldiers’ wives around the country, and he was also involved in recruitment. Michael explains that the family knew that his grandfather had been first Commissioner of the Garda Siochána and had played a part of the Rising, but little else was known. He feels that his grandfather seems to have been respected by both sides. His grandmother, Julia Cullen from Ashbourne, Co. Wicklow told him about personalities rather than events. She and Michael Staines seem to have initially gone out together in about 1920 and were married not long afterward, he says. The mother of Michael Snr. was very republican and several of her sons fought for Irish freedom, including Liam who fought in the Mendicity Institute. His sister, May Staines, worked as secretary to Michael Collins. Michael Staines was elected first Sinn Féin TD for St Michan’s in 1919. He was elected TD for Dublin North West in 1921 and 1922. He voted for the Anglo-Irish Treaty in 1922. He was a member of the Irish Republican Brotherhood and was on its Supreme Council from 1921-1922. He was elected to Seánad Éireann in 1928 and served until 1936. Michael explains that his family was never vocal about his grandfather’s role in the foundation of the State. Times were tough for the family in the 1930s. Michael’s mother was interested in her father-in-law and she imbued in her son the history of that time. He remarks that in the commemoration year of 1966 it was not generally known who had served as the first Commissioner of the Garda Siochána. He had not been aware for some time of his grandfather’s witness statement to the Bureau of Military History, which runs to about forty pages and is very detailed. Michael Snr. was in receipt of a military pension which helped the family finances considerably. The various locations at which Michael Staines lived in Dublin are detailed. His last home in Clontarf is still within the family. He is buried in a cemetery on Castle Avenue in Clontarf and the family has donated much material relating to him to the Garda Historical Society. Michael Jnr. describes his grandfather as a very good organiser and a hard worker, and he is remembered as a pleasant, quiet man who never discussed his role in the Rising and its aftermath. Staines is best remembered as the first Commisioner of the Garda Siochána. He stated “The Garda Síochána will succeed not by force of arms or numbers, but on their moral authority as servants of the people.” His grandson remarks that this idea is his great legacy and one which all Gardaí can be inspired by. Michael explains the difficulties encountered as two sets of people, former Volunteers and former RIC constables joined force. The Kildare mutiny came about when some Guards rose up against former RIC men. Michael Staines resigned and was succeeded by Eoin O’Duffy. The regulation that sitting or former TDs could not be appointed Commissioners was instigated, and is still in force today. The organisational ability of Michael Staines is described as his grandson explains the manner in which he went about getting arms. His brother Humphrey, who imported guns for the Volunteers and who served in the Royal Navy, is remembered. Their parents were Margaret McCann and RIC man Edward Staines who married in 1883. The interviewee’s aunt has created a family tree which he would like to investigate further, he explains. He discusses the extraordinary atmosphere which must have prevailed at the time of the Rising, and he recalls the fact that his father, Lorcan Staines, told him of meeting former comrades of Michael Staines from both sides of the Civil War, all of whom remembered him with affection Michael Staines was a supporter of Cumann na Gaedheal and an alderman,TD and Senator. His son, also named Michael, was strongly active in the Fine Gael party. The interviewee is of the view that Irish public should be proud of the country which these people gained for us, and he recalls his mother’s good opinion of her father-in-law. He remembers his grandmother, Julia, who lived to a good age. He recalls her as a woman of strong character and he wishes now that he had had longer conversations with her about her husband’s life and career.