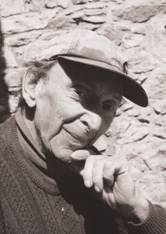 This interview began with the emphasis on Pauline Hickie’s background as one of the Phillipses from Co. Down, and with tracing the family tree. She spoke about her strong personal belief in her Protestant faith, even though she had been obliged to bring up her children in the Catholic tradition. Looking through the family album, we came across some Hickie family members, who were high-ranking in the British Army. The photographs brought Pauline back to her very early days growing up at Mussorie in the foothills of the Himalayas, where her father was an Inspector of Police. Later photographs showed a time so removed from today, a time when the discussion around the dining-room table in Slevoir House would be about war manoeuvres, and strategy and successes in battle. The conversation then focused on the connection between the Hickies and Kilelton in North Kerry, where the family originally settled. Pauline spoke sadly about the sale of Slevoir to the Salesian Sisters, and its subsequent re-sale.