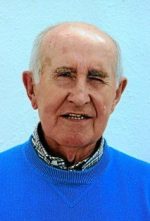 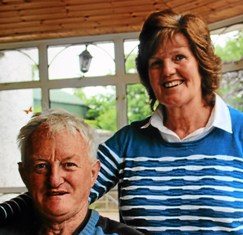 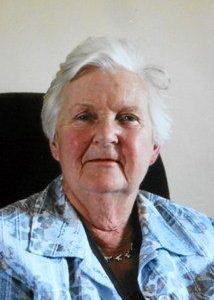 John Fitzgibbon worked as a gardener for the Wyndham-Quin family, and he and his duties are recalled by his son Seán. The Head Gardener at that time was Mr Pullman, and John Fitzgibbon’s colleagues were George Rohan, Tom Dwyer, Paddy Ryan and Louis McCarthy, who would also take care of the pheasants on the Estate. John Fitzgibbon’s duties included working in the flower garden, the glasshouses, the kitchen garden, the orchard and the lawns. His son Seán has a clear memory of robbing apples from the orchard at the Manor when his father’s attention was elsewhere! The stocking of the River Maigue and the Fishery and Hatchery were the responsibility of Headman Mr Rosse. When John Fitzgibbon was first employed as a gardener, he was provided with a house in the village. This building now houses the Stacpoole antiques business. In the 1940s Seán’s mother, Margaret (formerly Hogan) from Ballyagran, worked as a cook at Croom Hospital. She set up tea rooms at the family home in the village and the business proved very successful. Following Seán’s marriage to Nancy Cavanagh from Shanagolden in 1954, she opened the first restaurant in the village. She named it Marian as it was established during Marian Year. The decades of the 1940s and 1950s in Adare are recalled. Seán remembers playing hurling in the main street, and the busy creamery where all the local farmers brought their milk. Everybody had a push bike which was used to travel to Limerick city or to the dances. Seán’s father John was a member of the Old IRA. Seán has many stories to tell about his father’s activities during turbulent times, including his dashing out the back door of his home at Rieenroe, Adare as Irish Free State soldiers came in by the front door. His life was in danger on several occasions and he was lucky to make good his escape. He spent time in Croom Jail, but was brought home at weekends by the Garda Sergeant in Charge, who trusted him. Seán is proud to have his father’s Enfield rifle in his possession. The Adare Brass and Reed Band would practice in the Band Room, close to the Fitzgibbon home, and Seán explains that all his uncles and aunts were musicians who would play by the roadside near Woodlands on summer evenings . The fountain in the centre of the village was erected in 1844 by the Wyndham-Quin family in gratitude to the people of the village for saving the Manor from destruction when a fire broke out there. Seán well remembers going to the fountain pump for water. He witnessed the first groups of tourists to arrive in Adare, and explains that the only customers to his mother’s tea rooms in earlier days had been passing commercial travellers and local farmers. Later, when the McNamara family began their horse drawn caravan business, the tourists would arrive in convoys. Seán has been a member of the Red Cross from an early age. The unit was set up in Adare by Nancy, Countess of Dunraven, and Seán discusses the very efficient unit run by Bill Overton. The unit won the national title on two occasions, and he explains its success in detail and the members’ subsequent meeting with President Éamon de Valera. Coursing in Adare is also discussed and it is explained that the Irish Cup, hosted by the Earls of Dunraven for almost one hundred years, was run at Clounanna, near Kilgobbin on the Dunraven Estate. This event always prompted a gleeful day off school for local children, and Seán clearly recalls the hawkers who would attend the meeting, and the large crowds which would gather.