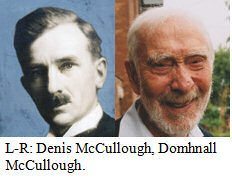 Track 1: The Price family of Rush, Co. Dublin, is discussed, and the experience suffered by Teresa McCann’s father, John Price, prior to the Rising in 1916 is recalled. She also describes the meeting of her father with Jack ‘Rover’ McCann on the Friday night before Bloody Sunday (21 November 1920) and McCann’s subsequent arrest and execution by the Black and Tans. Track 2: Teresa McCann points out that her future husband, Seán McCann, was born two weeks following the killing of his father, Jack. Jack’s brother was killed during WWI in the Battle of the Somme in 1916, while fighting with the British Army some months after Jack had fought in the 1916 Rising. Track 3: The pain and suffering endured by Teresa’s mother-in-law, Annie McCann, following her husband’s death, was evident to everybody, explains Teresa. Track 4: Séan McCann and his working life in Malahide railway station is recalled by his widow, and she also discusses the memorial to Jack McCann in Fingal, and the fact that his widow, Annie McCann, did not attend any of the memorial ceremonies in the year after his death, or in the following years. Track 5: Teresa McCann recalls that her husband, Séan, would raise the tricolour at Malahide railway station each year during Easter week, to the concern of some of the local population. Mary Monks, who taught with Tomás Ashe in Corduff National School, is also recalled.