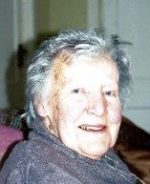 Track 1: Angela Eborall (née Cotter) was born in London, the grand-daughter of a Church of Ireland rector and his wife in Ardcanny, Co. Limerick. After graduation from Trinity College, Dublin, her father, Gerald Cotter, emigrated in 1900 to Burma for employment as a geologist. Angela recalls her mother Rosalind’s family, the Coughtries, their work in Hong Kong and the connection with Ruskin. She also recalls some memories from her childhood in Burma and India, and explains that it was commonplace that there could be long separation between spouses. When WWII broke out, Angela was in England to where the family had returned having been in South Africa for a period, and she remembers some details of Blanko. She also recounts an anecdote relating to Unity Mitford. During the war, Angela undertook work in the Red Cross at Stoke Mandeville for a period, and she describes the excitement of young people who were joining up and getting away from home, and she also recalls that her father joined a local regiment in India during WWI. One of her brothers joined the Royal Navy in 1936 and she explains that his ship was torpedoed off Monte Cassino, and describes his escape from the vessel and his recovery in hospital. Track 2: The connection with the Brasier Creaghs and her recent visit to Creagh Castle is described. She lists some historical figures connected to the Cotter family including Nano Nagle and Theobald Mathew and she talks about the nun’s work with the poor. She further explains that her ancestor, Commander in Chief of King James II’s armies in the southern counties and governor of Cork in the 17th century, was a Roman Catholic, much praised by the local Protestant community. His grandchildren were brought up as Protestant following their father’s execution. Track 3: Angela tells the story of visiting Ireland in her young adulthood and of meeting her husband, Ulick O’Connor Milborne-Swinnerton-Pilkington. She describes the village of Castletownshend at that time. Angela’s home there had previously been occupied by the artist and writer, Edith Somerville, whom she discusses. Track 4: Her father, Gerald de Purcell Cotter, was descended from the Purcells of Loughmoe. Her great-grandfather had three wives, one of whom was Mary Purcell with whom he had sixteen children. Angela talks about her father and his siblings who studied at Trinity College, Dublin, and she proudly mentions that her own son, Lionel, is a professor at NUIG. She reflects on the absence of a close connection with her father owing to separation during her childhood. Her Coughtrie aunts and their artistic education in Germany are remembered, and she talks about the portrait of the three sisters, painted by the Kaiser. Her father Gerald retired in the mid-1930s and was a contributor to the Journal of the Cork Historical and Archaeological Society, writing about the Cotter genealogy. She considers that her father felt he was Irish and would mix with Irish people when in South Africa.