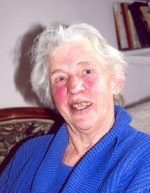 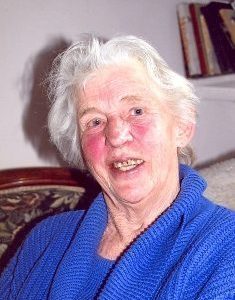 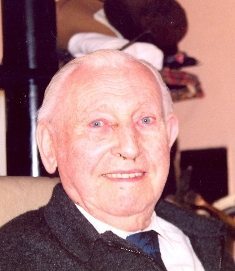 Ann Dalby is the eldest of the three children of the Bluett family. She was born at 92, St. Stephen’s Green in Dublin, the home of her grandfather, R.R. Cherry who was one of the last Lord Chief Justices of Ireland under British rule. Her father, Rev. Sterling Bluett, ministered in several Dublin parishes, including Harold’s Cross, Deansgrange, Finglas and Rathmichael. Her mother, Maud Cherry, worked as a teacher at Alexandra College and was Vice Warden at Trinity Hall. In later life she studied law at King’s Inns and qualified as a barrister. Ann recalls her mother working on her book Scenes from Irish History during her childhood, and she discusses her memories of her five Cherry aunts who lived with her family at 92, St. Stephen’s Green. Stories told to her about the Green are recalled, such as its use as a place to exercise horses and the charge of 2d for the use of the chairs. One was allowed to sit on the benches free of charge. Ann’s mother, Maud Cherry, and her younger sister Kitty had planned to sail to China to undertake missionary work, but these plans were changed when Sterling Bluett proposed to Maud. Sterling and his brother Douglas joined the British army and fought during WWI and Ann describes the duties they undertook at this time. Ann recalls her paternal aunt, Noel Bluett, who trained as a physiotherapist and worked from her home in Taney House in Dundrum. She was among those who later established the Children’s Sunshine Home in Stillorgan where she treated children suffering from rickets and other illnesses. The Cherry family summer residence at Killincarrick House in Greystones, Co. Wicklow, to where her maternal aunts relocated during the 1916 Rising, is described. During their stay, to everybody’s amazement, a small aeroplane landed on the grounds of the house.
Another family story relates to the visit of King George V to Dublin in 1911 when her grandmother was presented to the king at Dublin Castle. The poverty which prevailed among a section of the population in Dublin is illustrated by an anecdote recounted by Ann. When her grandmother was travelling up the hill to functions in Dublin Castle and when occasionally the horses slipped on the cobbles and the carriage stopped, poor women would put their hands through the windows to feel the material of her dress.