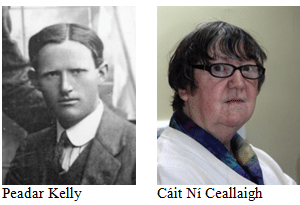 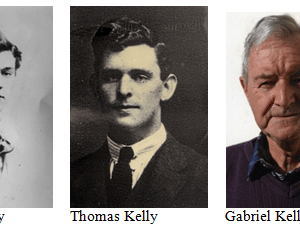 Peadar Kelly worked in the civil service in Liverpool as a youth, and on his return to Ireland he became involved with the Gaelic League, played Gaelic games and took part in other Gaelic-related activities. His daughter, Anne Marie, discusses a photograph showing the 1909/10 Fingallian football team which includes her father and his brother Jack Kelly. Anne Marie recalls hearing about the members of the Fingal Brigade, which included her Uncle Jack, who were sent into Dublin during Easter Week 1916 at the request of James Connolly and selected by Thomas Ashe. Ashe was a personal friend of Jack Kelly who was chosen to go to the GPO. His brother Peadar was active in Fingal in general and was involved in the Battle of Ashbourne. News of the surrender marking the end of the Rising came as a shock to the men who had taken part in the action at Ashbourne. This engagement had been a success in terms of the acquisition of arms and the capture of the barracks. When news of the surrender came, the men were camped at Kilsallaghan where they were arrested and later transported to prisons in England. Peadar Kelly was detained at Wandsworth Prison and Jack Kelly at Knutsford Prison. Both men were later interned at Frongoch in Wales. Anne Marie explains that the men became involved in the fight for freedom on their release, and her father was again jailed from December 1920 to December 1921. Letters which he wrote home during this time are discussed and Anne Marie mentions a letter to his sister Margaret which describes his dismay at the outbreak of the Civil War. Peadar Kelly’s father was an Irish speaker from Co. Galway, so he was a newcomer to Swords, Anne Marie explains, adding that he was a farmer and he also owned a stud horse. She feels that it is possible that her father and his brother were recruited to the Irish Volunteers through their association with the GAA. She recalls the fact that her home was filled with 1916 memorabilia and that her father spoke quite a lot in general about the people of the time. She sings one of his favourite satirical republican songs entitled Harp or Lion. Peadar worked at the Irish Land Commission and the verses of the song are written on that department’s headed notepaper. Jack Kelly was killed in a road accident in 1939 on the Main Street in Swords, and his niece recalls what she has heard about his physical demeanour and character. Both Peadar and Jack Kelly supported the anti-Treaty side, though Anne Marie does not have any account by either man of their activities during this period. She says that Peadar loved to reminisce with his friends in The Star public house in Swords, and she mentions local undertaker, Mick Rock, whom she remembers from her childhood. Peadar spent time incarcerated at Wandsworth, Frongoch, Arbour Hill and Ballykinlar, and his daughter reads a letter he wrote from Wandsworth Prison to his sister Margaret. Peadar and Margaret were the youngest siblings in the Kelly family. Anne Marie describes her father as being very interested in music and a man who loved singing, performing as a young man at functions and at the Féis Ceoil. After the Troubles, Peadar worked as a civil servant with the Irish Free State at the Department of Justice. His daughter recalls his attitude towards the members of the RIC, and she feels that those who soldiered for the British Empire made an error of judgement. The family are no longer in possession of Peadar Kelly’s 1916 and Black and Tan medals which have unfortunately been lost over the years. Anne Marie did get certificates which show that her father and uncle (posthumously) did receive both medals. Her father applied for the Old IRA pension but she has not yet read his application. Anne Marie has two sisters, Cáit and Mary, and a brother Seán. She does not recall the 1966 commemorations because she was abroad at the time. However, she has a sense that the events were disappointing as they were low-key and displayed an awkwardness and an absence of pride. In her opinion, Ireland’s independence should have been celebrated in no uncertain terms. She supported the IRA of the 1960s and sees their actions as a continuation of the fight from 1916. She reflects on present-day Ireland and whether or not the country has become what her father and uncle fought for. In her opinion, elitism and a lack of concern for the less fortunate exist, along with confusion about who we are as a nation. In the centenary year of 2016, she would like to have her father remembered as a Gael. She discusses her father’s connection with the Fingallians from 1901 onwards, and the celebration organised in 1951 in his honour is remembered. He was more interested in Gaelic football than in hurling and often attended games at Croke Park. Anne Marie has a medal marking the winning of the Fingal Hurling League in 1913/14, and a photograph marking success in the Fingal Football League in 1909/10. Peadar served as chairman of the club for decades, she explains. She examines a publication produced in 1921 in Ballykinlar Camp. Both Margaret Pearse and Anne Marie’s aunt, Margaret Kelly, were school teachers, and she reads a letter written by Margaret Pearse in 1933 relating to fundraising for St Enda’s.