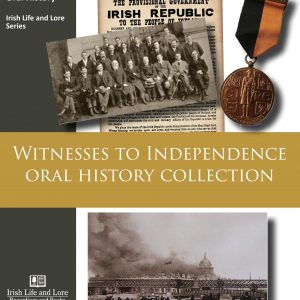 During the summer of 2003, the family of Col. Sean Clancy made contact with me as they were anxious that the recollections of this remarkable man should be recorded and preserved, as he had lived through the historic and turbulent days of the early 20th century. In November of that year I made my way to Dublin and met Col. Clancy at Newtownpark Nursing Home, where he is now resident. Sean Clancy was born in East Clare in July 1901 and recalls clearly being sent to Limerick on an errand by his father on Easter weekend 1916. The city was agog with news of something happening in Dublin, but as no newspapers were circulating nothing could be confirmed. In 1919, he left for Dublin where he joined the Volunteers, 2nd Battalion, Dublin Brigade. He described for me in detail the mood of the people in Dublin in those troubled times. He later joined the Free State Army and worked with Michael Collins in Portabello Barracks. Sean has a clear memory of the events of Bloody Sunday. “It was a night of terror in Dublin”, following the shootings in Croke Park, he told me. As a younger man he was a loyal supporter of Eamon de Valera, but following de Valera’s decision not to go to London for the Treaty negotiations in 1921, his loyalties changed and his opinion of the man was revised. My first meeting with Col. Sean Clancy proved fascinating and vastly informative and I promised to return on another day to record some more of the recollections of this wonderful man.