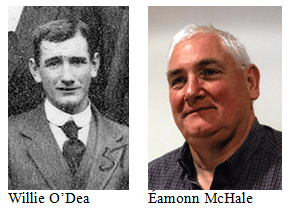 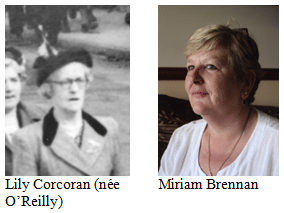 Elizabeth O’Farrell was born in Dublin city to Margaret and Christopher O’Farrell in 1884. Her sister Margaret was Donna Cooney’s great-grandmother. Donna believes that Elizabeth was an ordinary person caught up in extraordinary circumstances. She says that people at the time placed great importance on Irish culture and identity, and they were fighting for their own salvation as a people. Elizabeth wrote her own account of her involvement in the Rising, and this account illustrates the fact that she was very conscious of her actions. She accompanied Patrick Pearse to make the formal surrender in 1916, and she carried the surrender to various garrisons around the city. She was later arrested and detained. Elizabeth’s determination at that time, and her care of the wounded in the GPO and ensuring that adequate food was available, are matters considered by Donna. She explains that the women probably got very little sleep during the Rising as they were constantly working at various tasks. Elizabeth wrote that on the night after the surrender she got a good night’s sleep as she was quite exhausted. Just three women remained in the GPO at the end of the Rising. It is felt that Elizabeth was asked to accompany Pearse to make the formal surrender as their families lived close to one other and she was known to him. Donna discusses the reason why Elizabeth O’Farrell stepped behind Patrick Pearse in the iconic surrender photograph. The Nurse Elizabeth O’Farrell Foundation set up in her memory is mentioned. Donna considers her great-grandaunt’s strong character and she says that the revolutionary cause possibly provided her with physical strength. After the Rising she was held for some months and released following General Lowe’s petition for clemency on her behalf. On her release she became involved with other Cumann na mBan members in taking care of the families of prisoners. Later, she and her sister Margaret qualified as midwives at Holles Street Hospital in Dublin. When Margaret O’Reilly was widowed she was left with a large family to support. She set up a nursing home on Dorset Street and was aided by her sister Elizabeth. Margaret had also been a member of Cumann na mBan, though at the time of the Rising she was assisting a relative who was heavily pregnant. Donna explains that family lore has been passed down about wanted men being hidden in the nursing home during the later Troubles. At one time Elizabeth O’Farrell was engaged to be married, but when her fiancé went to South Africa the engagement was broken off. Elizabeth’s friendship with Julia Grenan endured and the women are buried together at Glasnevin Cemetery. They had many friends and memories in common, Donna explains. Elizabeth’s relationship with Donna’s family is also remembered. Events of Easter Week, written by Elizabeth O’Farrell, was published in the Catholic Bulletin. Her character, personality and caring nature are discussed. The extent of her involvement in Cumann na mBan is currently unknown. Donna explains that Elizabeth was not a person to put herself forward and she displayed a modesty about her important role. Donna speaks about her own pride in her family relationship to Elizabeth, one of the few prominent women involved in the Rising. Her historical role is important to the family, though Donna considers that it is also important for everyone to know that these were ordinary people in extraordinary times. She discusses the family connection with the commemorations of 1966. She recalls her mother visiting her grandaunt’s grave in a private capacity and says that the family was not keen on being visible at public events. She speaks about the memorabilia of her great-grandaunt and where this might now be located. It is known that Elizabeth deposited items into archives. The importance of keeping her memory alive is considered. Donna examines some family photographs which include Elizabeth O’Farrell. A photograph which shows her in nurse’s uniform, taken about 1920, is also displayed and discussed.