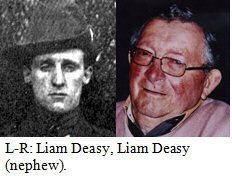 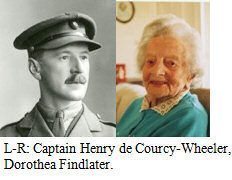 Track 1: Dorothea Findlater is the daughter of Captain Henry de Courcy-Wheeler, Staff Officer to General Officer Commanding W. H. M. Lowe, commander of the British forces in Dublin at Easter 1916. Also heard in the recording are her cousin, Grattan de Courcy Wheeler, and her son, Alex Findlater. She describes early memories of Robertstown House in Kildare, and from 1914, memories of life at the Curragh, recalling pastimes such as hockey and tennis, and the air force base located there. Track 2: Dorothea Findlater speaks of the surrender of P. H. Pearse, who was accompanied by Nurse O’Farrell, to General Lowe and her father, Henry de Courcy-Wheeler. Her father, accompanied by Nurse O’Farrell, also took the surrender from other republican leaders in Dublin. Dorothea recalls climbing to the top of the water tower at the Curragh with her mother and nanny, and witnessing the flames glowing from Dublin city during the Rising. Artefacts relating to the Rising in Dublin, kept in the de Courcy-Wheeler home for many years, are described. Track 3: Contains a description of Dorothea Findlater’s education at the Curragh, memories of the Civil War while living at Robertstown House, the prevailing tension, the threats received and the standoff. A raid on the house by the Free State Army while pursuing republicans on the run is also mentioned. Track 4: Dorothea speaks about the maternal side of the family, the pursuits enjoyed by her parents and grandparents, the sale of Robertstown House and the move to Foxrock. Track 5: The early years of the Free State are discussed and the setting up of Bord na Móna. She describes her father’s character, the domestic staff at Robertstown House, and her memories of military funerals at the Curragh. Track 6: Dorothea’s meetings with several Governors of Northern Ireland, through her involvement with the Empire Theatre of Varieties in Belfast, are recalled. Track 7: The Land Commission and ground rents in Co. Kildare are discussed. Track 8: Contains a discussion on WWII and memories of aircraft landing at Leopardstown from which Dorothea brought documents to the British embassy in Dublin. The burning in 1923 of Palmerstown House, the home of the Earl of Mayo, is recalled. Track 9: Details memories of Dorothea’s days at Trinity College and playing on the Irish hockey team.