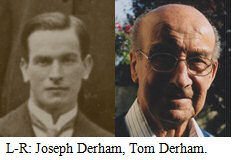 Track 1: Grattan de Courcy-Wheeler describes the Grattan family background and his family connection to Drummin House and estate in Co. Kildare. Track 2: The Irish patriot, Henry Grattan, is recalled by Grattan de Courcy-Wheeler who is a great admirer. He discusses his grandfather, Dr. Robert de Courcy-Wheeler, known as ‘Diamond’ to his friends, who had a medical practice at Monkstown, Co. Dublin, and who owned Drummin House. Track 3: Cecil de Courcy-Wheeler, Grattan’s father, is described, as is Grattan’s own education. Track 4: Grattan’s grandfather, Robert, was Chief Medical Officer with the British Army at Malta during WWI. His granduncle, Henry de Courcy-Wheeler, was appointed Staff Officer to General Officer in Command W. H. M. Lowe, a position he held during the 1916 Rising in Dublin. Countess Markievicz was Henry’s wife’s distant kinswoman, and Henry took her surrender after the Rising. During the War of Independence, Drummin House was billeted by republican forces. Track 5: Grattan de Courcy-Wheeler discusses the actions taken by his granduncle, Captain Henry de Courcy-Wheeler, during and after the 1916 Rising. Also discussed is the caretaking of Drummin House which was left to his grandmother, Mabel, in later years when her husband had his practice in Monkstown, Co. Dublin. Track 6: Contains a description of the disappointment of the de Courcy-Wheeler family at their effective exclusion from honorary positions of trust in the administration of the country, following the signing of the Treaty. Prior to the setting up of Bord na Móna, Henry de Courcy-Wheeler was very involved in promoting the extraction of peat and, in this context, came to know Éamon de Valera very well. Grattan discusses this, and also the surrender of P. H. Pearse after the 1916 Rising. He also gives his views on the Economic War of the 1930s.