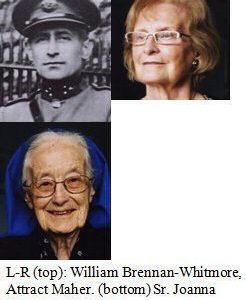 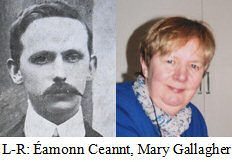 Track 1: Jeanne Bulfin’s grandfather, William Bulfin, emigrated from Ireland to Argentina in the late 1800s, where his son Éamon was born in 1883. The family returned to Ireland in 1902 and later Éamon attended Newbridge College in Co. Kildare. Track 2: Éamon Bulfin later attended St. Enda’s, where he became a favourite pupil of principal P. H. Pearse, explains Jeanne Bulfin. He later became a teacher at the school. His passion for history and learning is described. The fact that his two uncles, Frank and Joe Bulfin, were active in the Land War and were members of the IRB, is recalled by Jeanne. Track 3: Éamon Bulfin’s involvement with munitions at St. Enda’s is described. His presence on the rooftop of the GPO during the week of the Rising is recalled. An anecdote told by her father about the involvement of Cumann na mBan, is recounted by Jeanne Bulfin. Track 4: The two flags raised on the roof of the GPO during Easter Week 1916 are discussed. The bond formed between Éamon Bulfin and Michael Collins in Frongoch Camp in Wales, following the Rising, is discussed, as is Éamon’s devastation on learning of the death of Collins in August 1922. Track 5: The deportation of Éamon Bulfin by the British to Argentina after his release from Durham Jail in May 1919, and the efforts of his uncle, Frank Bulfin are recalled, as the latter attempted to change the decision of the Authorities on the matter. Track 6: Éamon Bulfin’s response to the events of the Civil War on his return to Ireland at the end of 1922, is discussed. Track 7: Éamon’s appointment by de Valera as Consul to Angentina in 1919, are discussed, as is the reason for this decision by de Valera. The career of Éamon Bulfin as a rate collector for Offaly is also recalled. Nora Brick from Tralee, Co. Kerry, who had worked for Kerry republican, Austin Stack, became Éamon’s wife. She is recalled by her daughter, Jeanne, who reads from a letter written by her father to her mother about the horrors of the Civil War. The visits of Éamon Bulfin’s compatriots to the family home are recalled, as is his deep love for Ireland.