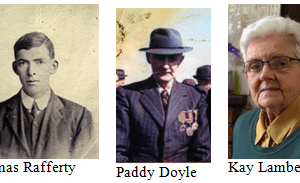 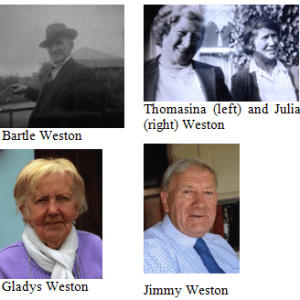 James O’Carroll is the grand-nephew of John Tuohy, brother of his grandmother Margaret Tuohy. James’s mother, Elizabeth Talbot, was an only child and she inherited the papers and folklore relating to the family. In 1916, John Tuohy of the RIC and the son of an RIC man, was Sergeant in Charge of the police barracks in Ashbourne. The Tuohy family had originally come from east Clare and many became educators or members of the clergy. James mentions the Tuohy Classical Academy at Killaloe. To the family, the so-called ‘battle’ of Ashbourne was an ambush and a war crime. The innocent family in the barracks were surrounded and attacked without warning. In the 1970s, James’s mother wrote an account of the attack. She corresponded with John’s children, her cousins, particularly with John who was aged 11 at the time of the ambush. The family saw the attack as a cowardly event as they had no chance to defend themselves. John Tuohy’s pregnant wife, Catherine, and her five children were forced to witness a mob attack. James’ mother claimed that Catherine later developed a nervous condition, possibly as a consequence of this experience. The irony was that Catherine (née Collins) was a distant cousin of Michael Collins, a fact which was evidently unknown to Thomas Ashe and Richard Mulcahy. James’ mother, Elizabeth Talbot, wrote her autobiography for circulation within the family and James feels that it is important that her account be brought into the public domain. James reads from his mother’s account of events in Ashbourne in 1916. He explains that his mother’s father and uncle were also in the RIC, as was her maternal grandfather. John Touhy’s son, also named John (1905-1969) was later to join the Garda Siochána. From an online RIC forum, James reads that in January 1915 his granduncle, John Tuohy, was Acting Sergeant in Charge at Ashbourne and was appointed Sergeant around February or March 1916. A group RIC photograph is discussed, which includes John Tuohy as a young man. James reflects on the effects of the attack on his family. He speaks of some Talbot cousins in Tralee whose shop was burned down by the Black and Tans, possibly because their name was written in Irish on the shop fascia. He describes the Tuohy family as intellectual. The perspective brought by his mother to the attack on Ashbourne Barracks was that it was a simple ambush, with nothing glorious about it. Not only were the people in the barracks attacked without warning but so also were the RIC men who came to their aid. The family oral tradition was that Thomas Ashe was more merciful than Richard Mulcahy. James does not see the RIC men and their families as being the ‘other side’ but as being Irish people who were an easy target, caught up in a crisis that was not of their making. The real skirmish occurred outside the barracks when the relieving force was attacked, and the men inside the barracks were not involved in this, he explains.