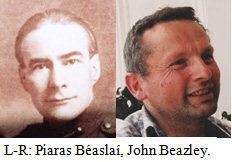 Track 1: The Barry family home near Hacketstown in Co. Carlow is described in detail, as is the Fenian connection to the Barrys. Track 2: The interviewee’s father, Michael Barry, and his two aunts, Kate and Sheila Barry, together with their republican affinities, are recalled. The capture of Kevin Barry in September 1920, his sentence to death in Mountjoy Jail and his execution, are described. Some of his personal belongings, such as his prayer book which was on his person when he died, are displayed. The interviewee’s father, Michael Barry, was also very active in the republican movement, and his activities are described. Track 3: Michael Barry was arrested at his home near Hacketstown in December 1920, and this event is recalled by his son, as are the executions carried out during the Civil War. Track 4: The difficulties experienced by Michael Barry in readjusting to normal farming and family life, following years on the run, are examined. Some literature and posters, printed for propaganda purposes prior to and during the years of the Civil War, are displayed and discussed. Track 5: Features a discussion on the Old IRA, comparing the organisation to its counterpart of more recent decades. Track 6: The interviewee’s membership of Fianna Fáil is discussed, and a secret passageway in the Barry home, which was used by revolutionaries on the run over the generations, is examined. Track 7: The funeral of Kevin Barry, and his later reinterment, are discussed, as are the great sacrifices endured by the Barry family, due to the strong republican stance to which they adhered. The refusal of a state pension by Kevin Barry’s mother, who lived in a flat in Molesworth Street in Dublin, and who died in the Bon Secours hospital in Glasnevin, is discussed.