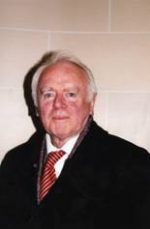 This recording was compiled at the Lord Mayor’s chambers in City Hall, Cork. Jim Corr twice served as Lord Mayor of Cork during his 36 years in local government as a Fine Gael councillor. He recalls his schooldays at the Christian Brothers’ College and becoming involved in amateur drama productions. He graduated as a qualified teacher from UCC, and spent six years in Nigeria teaching in a Catholic school run by Cork nuns and later in a school run by SMA priests. He speaks of his memories of his return to Cork, and Aloys Fleischmann’s constant attempts to get funding during Jim’s early days in Cork Corporation. He discusses the fight for survival of the National Ballet Company which was ultimately unsuccessful and explains anecdotally the great Fleischmann involvement with the Choral Festival and other musical events in the city.