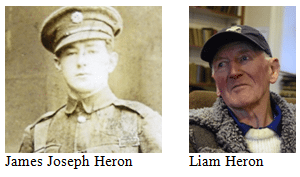 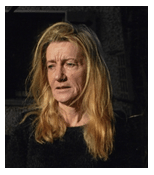 Jim Heron’s father, James Joseph Heron, lived in Ballybough in Dublin. He attended O’Connell Schools and in his youth became an apprentice butcher. He was a member of F Company 2nd Battalion Irish Volunteers. On Easter Monday James Heron was enjoying the Fairyhouse Races, when he heard about the Rising in Dublin. He returned to the city and reported to the GPO, where he was given an American rifle. On Tuesday afternoon he was sent to an outpost at the Imperial Hotel, under the command of Frank Thornton. This group provided cover for the front of the GPO, which suffered artillery fire. The men made their escape through the buildings and, with a party headed by W. Brennan-Whitmore, Heron went up through Marlborough Street to Cumberland Street. On the Saturday, the building in which they took refuge was surrounded and they were arrested. They were marched to the Customs House, transferred to Richmond Barracks and on to England for internment. James Heron was initially imprisoned in Knutsford Prison and later in Frongoch Camp in Wales. His brothers Paddy and John were not involved in 1916, but his sister Molly was a member of Cumann na mBan. Jim remarks that a general republican resurgence had existed since the centenary of 1798. Arthur Griffiths’ United Irishman published nationalist material and many other nationalist activities were taking place. James would have joined the local unit on the North Strand, his son explains, and he discusses the smallness of the city at the time. The Heron family had come from Carlow to live on Bessborough Avenue, and the family business was butchering. James Heron was released from Frongoch in 1916, and Jim understands that he remained a member of the Volunteers though not on active service. Later he was again arrested and interned at Ballykinlar. Jim has read his father’s witness statement and pension application from which he has learned that James was arrested while on a tram in Talbot Street. He does not know the reason for this arrest other than the fact that James’s name was on an Intelligence list. James became friendly with the Lawless family from Swords, and eventually moved out to that location where he was to meet Anastatia Howard whom he married in 1932. He became involved in the local community, and was District Quartermaster of the Local Defence Force of the Collinstown district during the Emergency. The Lawless family was also involved in the LDF. Jim was a member of the FCA for some years and he later joined the Irish Army. Much of his service was along the border with Northern Ireland, and he discusses the stated policy of the Official and Provisional IRA which was to destroy the governments of both the North and the South. Some of the difficult situations which he encountered during his career at that time are recalled. He was promoted to the rank of Commandant in the Irish Army. He explains that each FCA Company at the time of the Troubles was asked to provide a 41 Platoon and to provide vital installations at certain places around the country, particularly at weekends. As the Troubles continued, a more organised system was introduced, he explains, and he discusses the support provided by the Army to the Garda Siochána and the Customs Service. James Heron supported Michael Collins, and Jim explains that though many in the area were supporters of Collins, very little action occurred there following an order from Dick Mulcahy that north Co. Dublin was zoned to remain quiet. This situation was maintained until the airport was raided for ammunition and the men at Balbriggan arose. James did not discuss his past with his family, though his son recalls that he would attend annual commemoration Masses. He mentions meeting a nonagenarian who had been involved in the takeover of the Castle in 1922. The village of Swords of the time is recalled. The Howards were a local family who were also involved in the butchering trade on the main street, with some land outside the village to fatten cattle. Jim recalls an occasion when a policeman tipped off his father that the Lawless home was to be raided, and his mother cycled immediately to their home to pass on the message. He recalls the firing party at his father’s funeral, explaining that at that time it was customary for the Old IRA to organise a firing party along with the Army. James Heron’s witness statement was signed by Frank Thornton, who had been his Commanding Officer at the Imperial Hotel in 1916. After the Treaty, Thornton served with the Irish Army and later returned to work in his insurance business. Jim recalls the 1916-21 Club which continued in existence for a number of years and which his father would attend. On the 50th commemoration of the Rising, James Heron was on the reviewing stand at the GPO along with members of the Lawless family, while his son Jim was on the march- past as a member of the FCA.