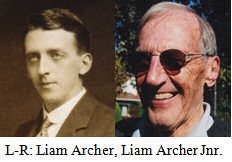 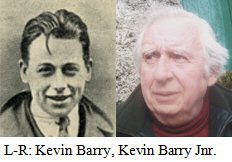 Track 1: The background of the Beazley family from the vicinity of Killarney, Co. Kerry is discussed, and John Beazley’s connection to poet and writer, Piaras Béaslaí, who was born and reared in Liverpool, is described. While there, Béaslaí became a member of the Gaelic League and was later invited, by Cathal Brugha, to join the IRB in Dublin. Track 2: Piaras Béaslaí’s use of his writing talents to further the cause of Irish nationalism is explored. John Beazley explains that his information on his relative was gleaned from his own research, from which he discovered that Béaslaí was angered by the Countermanding Order issued by Eoin MacNeill, and that during the Rising, he was second in command to Ned Daly, based in Church Street and North King Street. Track 3: Contains an exploration of Piaras Beaslaí’s terms of imprisonment in Portland and Lewes jails, and his return to Killarney on many visits in the following years, keeping in close contact with the Irish Volunteers there. Track 4: Béaslaí’s election to the First Dáil as Sinn Féin member for East Kerry is recalled, and John Beazley’s discovery, early in his life, of the legacy of his cousin which had been downplayed by his family, is explained. The family resemblance between the interviewee and his cousin, Piaras Béaslaí, is commented upon. Track 5: The background to the 1926 publication of Piaras Béaslaí’s two volume biography of Michael Collins: Michael Collins and the Making of a New Ireland, is discussed. Also explained is Béaslaí’s pro-Treaty stance and details are provided about an important speech he made at the time, which served to influence many people. Track 6: Following the signing of the Treaty, Piaras Béaslaí travelled to America to speak in support of its terms, while his fellow countyman, Austin Stack, simultaneously spoke there against the Treaty. During the Civil War, Béaslaí worked as an Irish Army press censor, and this work is discussed. The position of Seán Maguire, son of Lily Merin, at the funeral of Piaras Béaslaí in 1965, is discussed in detail, together with an outline of the work of Lily Merin in identifying British agents prior to Bloody Sunday, 21 November 1920, and her close friendship with Piaras Béaslaí. The deposit of the Piaras Béaslaí Archive in the National Library of Ireland is also mentioned. Track 7: John Beazley describes the background to the Victorian house he occupies in Killarney, which was once owned by Col. Leahy.