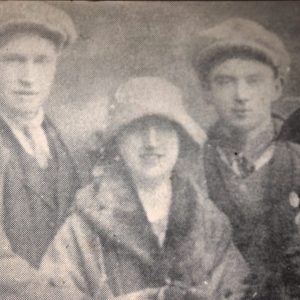 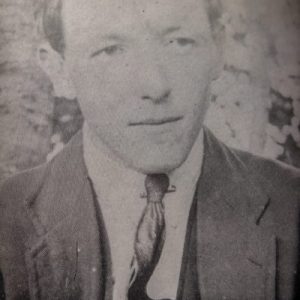 (1880s) Fr. Ó Ríordáin talks of events during Land League times and describes his grandparents, whose home was at Knockavorheen in Kiskeam during that time. The first clip includes an interview with Fr. Ó Ríordáin’s father, Jim O’ Riordan, who talks about the Moonlighters and moonlighting activity in the area of Kiskeam.

(1919) Fr. Ó Ríordáin describes the time when the local Republicans were drilling on the slopes of the Bocaura near Taur, and among the trainees were Jim, Seán and Nancy Murphy of Cumman na mBan. Romance was in the air too. It was on the return journey from training that Jim got talking to Nancy and on reaching the Shamrock House, Moylan met her sister, Nonie Mary. home on holidays from England. In the second clip, Jim O’ Riordan recalls that memorable time.

(1917, Summer): Fr. Ó Ríordáin describes the forming of the Kiskeam Company IRA in the summer of 1917 and the appointment of a Captain. In the third clip, Jim O’ Riordan discusses the democratic vote taken by the Company and its confirmation by Moylan.

(1921, May 16th a.m.) Fr. Ó Ríordáin describes the round up by British forces of 16 May 1921, the capture of Sean Moylan and his father’s incredible escape. In the 4th clip, Jim O’Riordan describes these events.

(1921, May 16th p.m.): The moving of gunpowder and rifles on the same day from an arms dump situated on the Riordan farm is described by Fr. Ó Ríordáin. In the 5th clip, Jim O’Riordan tells of the discovery by the military of the empty dump.

(1921, Aug 6th): Fr. Ó Ríordáin explains that Sean Moylan, an elected T.D, was released from Spike Island to take part in Treaty Negotiations. The raid on a farm near Millstreet to source fowl to feed the remaining Republican prisoners in Spike Island is described. In the 6th clip, Jim O’Riordan describes this event in detail.

(1921 latter part of): Fr Ó Ríordáin explains that during the Truce, his father was put in charge of the barracks in Newmarket which was utilised at that time for Sinn Fein Courts. In the 7th clip Jim O’Riordan describes his responsibilities in Newmarket at that time.

(1921, January 28th): Fr. Ó Ríordáin describes the successful ambush of an R.I.C/Black & Tan contingent at Tureengarriffe Glen in January 1921, and afterwards made use of a captured touring car. In the 8th clip, Sean Healy explains that he used this car to attend a wedding in Killarney at a later date.

(1921, June 16th): Fr. Ó Ríordáin discusses the successful June 1921 ambush of the Auxiliaries by the Republicans at Rathcoole. In the 9th clip, Sean Healy describes his experiences during this event, of setting a mine and activating it when the last lorry was passing over.