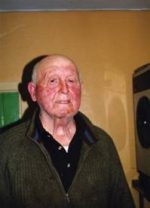 In the hours prior to this recording, Luke Dempsey, now in his 83rd year, had arisen at 6.00 a.m. and ploughed many acres of land. He is an agile and vibrant man who has many fine stories to relate. He explains how his present home and farm came to him, in a fascinating series of events. He recalls his maternal grandfather, Jim O’Keeffe who was a member of the IRB, who led a very interesting life. Luke’s father, who was also named Luke Dempsey, was a close friend of Frank Burke who was in the GPO at Easter 1916. Luke has a clear memory of Frank Burke calling to see his father, and the elderly men would sit and talk for hours about those stirring Easter days. Todd Andrews was a frequent visitor to the area to oversee the establishment of the briquette factory at Lullymore, and Luke remembers the huge sense of excitement and anticipation engendered by the opening of the factory He was also there to watch the factory being dismantled in more recent years. Before the recording concludes he describes a vivid memory from his childhood. He would watch the inhabitants of the little thatched cottages which lined the banks of the canal close to his house, as they cut turf from the bog, stacked it and loaded it onto the canal boats, for transport to Dublin.