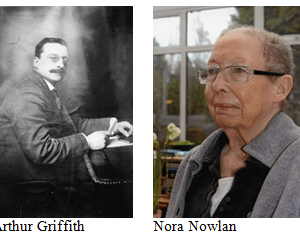 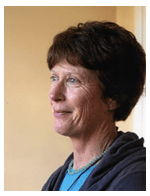 Mícheál Hodgins recalls his mother, Margaret ‘Peig’ Flanagan, who was born in 1895. Her father worked as a butler for a barrister in Merrion Square and in Glenageary in Dublin. Following an accident he lost this employment and became a caretaker at Blackrock Technical School, a job taken over by his widow following his death in 1910. Mícheál’s mother lived with her family in the caretaker’s flat. She was very interested in the Irish language and was involved with the Gaelic League. All of her family were involved in the movement and Mícheál suspects that the strong nationalistic influence in the family came from their mother. Peig Flanagan studied to become a teacher at Carysfort College in Dublin, as did her sister Rosie. Their brother Frank was involved in the struggle until the end of the Civil War. Through his research, Mícheál has discovered that Peig collected money for prisoners’ dependants. These included the dependants of her brother Frank and also of Mícheál’s father and uncle. Peig was detained and arrested when an anonymous letter sent to her describing movements of Free State troops in Dún Laoghaire was found on her person. She spoke to her son Mícheál about her activities at that time, and he reads from her witness statement. She and her sister Rosie were members of Cumann na mBan from 1917. Peig was a member of the Dún Laoghaire branch while Rosie was a member in Deansgrange initially and later in Blackrock. Mícheál remarks that dances were often organised as “fronts” for Cumann na mBan meetings. He discusses his mother’s brother, Johnny Flanagan, about whom he has little information. Frank Flanagan, who was born in 1902, was very young when he got involved. At the beginning of the War of Independence Peig was in charge of first aid and, for a time, was chairperson of the Dún Laoghaire branch of Cumann na mBan. During the Civil War she was appointed Adjutant. Mícheál speaks about Patrick Moran, his court martial and subsequent execution, and his mother’s role in this episode is discussed. Mícheál considers it fortunate that the Flanagan family did not split during the Civil War. Peig Flanagan was arrested in February 1923 and was released without charge after six months. Mícheál discusses the papers in the file relating to her case. Mícheál’s father, Patrick Hodgins, and his brother Billy were arrested in August 1922 and held at Mountjoy Priosn and the Curragh Camp until late 1923. He remembers his father, who had been a member of Fianna Éireann, as being mild-mannered and reasonable. His difficulty in gaining employment after Independence is recalled. During the latter part of the Civil War, Peig Flanagan operated near Blessington in Co. Wicklow, where her brother Frank was on the run. Her role was probably as a messenger or as a first aid worker. Mícheál has first-hand information from his mother and is aware of the information she gave to the authorities. She was a follower of de Valera and she accepted his proposal relating to constitutional politics following Independence. Peig Flanagan and Patrick Hodgins married in 1932. Peig worked as a temporary primary-school teacher, mainly at St Clare’s Convent at Harold’s Cross. Mícheál returns to the subject of the execution of Patrick Moran and mentions May Moran’s book Executed for Ireland. His mother’s role as a witness at Patrick Moran’s court martial is mentioned in the book. His own researches into the family’s role in Irish history are discussed, as are the reasons why he feels they got involved in the struggle. He discusses the Dún Laoghaire area and the larger British population there at the time. Consciousness was raised by various oppressive measures including conscription, curfew and the Black and Tan raids, he says, and he attempts to explain the two different aspects of her mother’s life. He remarks that the technical school in Blackrock was used as a safe house. Mícheál has his mother’s, his father’s and his uncle Frank Flanagan’s medals. Frank died in 1946 when Mícheál was very young. Some letters written by Peig are examined, which mainly relate to her dismissal from her employment for engaging in “irregular activity”. She collected songs which she would teach in school. His father’s task in intercepting letters being sent to the RIC in Blackrock is also described. Peig was a religious person and her son recalls her fundraising for the St Joseph’s Young Priests’ Society in later life. He also recalls his father’s annoyance at being asked to go on hunger strike and subsequently being branded a coward. Patrick Hodgins was brought up in Williamstown in Dublin and attended Booterstown National School. He is remembered by his son as an avid reader. He was employed as a clerical officer in the technical school in Blackrock. Peig’s sister, Rosie Flanagan who was born in 1897, has been accused of being a spy and her nephew Mícheál discusses the basis for this accusation. The story is related in May Moran’s book, he says. Rosie was secretary of the Blackrock Cumann na mBan during the War of Independence and Civil War. In later years it seemed that the Flanagans and others realised that the story should be written down. In 1966 he would bring Peig, Rosie and May Kane to the Montrose Hotel to meet with other former members of Cumann na mBan engaged in gathering the information. He discusses this process and the list of members drawn up by his mother. Mícheál reads from an American publication concerning a raid on the caretaker’s flat at the technical school at Blackrock during the Civil War. Mícheál’s grandmother was the caretaker in question. He recalls the Civil War dispute by national school teachers who were engaged in “irregular activity”. He reads the report of the interview conducted by the Department of Education with his mother Peig Flanagan.