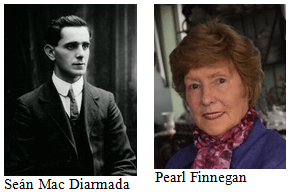 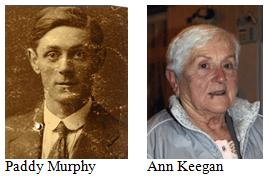 Martin Dermody’s mother is a member of the McGrath family from the North Strand in Dublin. His grandfather, Patrick McGrath, was a printer from Kilkenny who later worked at the Irish Press. In 1916 he was Quartermaster-Sergeant of D Company Dublin Brigade Irish Volunteers. His sons, Paddy J. and Richard McGrath, were also involved in the Rising. Patrick was a compositor at the Irish Independent at the time of the Rising. Martin is not aware of the reason why his grandfather did not obey the Countermanding Order and was at the GPO with his son Paddy. His son, Richard McGrath, was about 15 years old at this time and was a member of Fianna Ếireann. Martin explains that it is uncertain whether or not Richard was in the GPO. Patrick was not there for the entire week as one of the leaders sent him home to his pregnant wife. According to family folklore Paddy was told not to go up on the roof, though he did. He was shot in the head, losing an eye, but he survived. The bullet remained in his head until he died in 1967. Patrick was imprisoned but William Martin Murphy, proprietor of Independent Newspapers, spoke for him and secured his release. Paddy had been sent to Mercers Hospital following his injury, and Martin explains that the nurses altered the ages of the men, thus Paddy escaped at that time. He was to be arrested later and interned. Patrick, Paddy and Richard McGrath became involved in the War of Independence. Patrick acted as quartermaster and organised the brigade. Martin remarks that his mother Annie told him about the men who visited the house. There was an arms dump under the stairs at their home on Northbrook Avenue, and she recalled the fact that the house was raided several times by the British. Annie’s older sister Winifred would date British soldiers in order to gather intelligence. After the War of Independence, Patrick rose to the level of Assistant Works Manager at Independent Newspapers, and he was later interviewed by de Valera and appointed as the first Works Manager at the Irish Press. He had supported the Treaty and served as Captain in the Free State Army and as a guard at Tintown on the Curragh. His son Richard also supported the Treaty. Martin’s father told him that Patrick McGrath was a single-minded man who was decisive and good company. Martin has read his grandfather’s pension application and statements made by others. Paddy McGrath was less involved owing to his head injury sustained in 1916. The decision-making structure of D Company is reflected upon by Martin. Paddy Moran and Dick McKee were remembered as close friends by his mother, and Martin discusses his grandfather’s visit to Paddy Moran some days before his execution and his offer to exchange places with him in prison. Martin recalls Richard McGrath’s stated opinion of the Provisional IRA some twenty years ago. Martin does not agree with the modern methods employed by the organisation. Richard McGrath died at the age of 84, and Martin remembers him well as a mild-mannered man. He was a member of the group involved in the retaliations at the Gresham Hotel on Bloody Sunday. He was arrested after the burning of the Customs House and interned until the signing of the Treaty. He worked as a carpenter at the Irish Press from the 1930s until his retirement. Martin’s paternal grandmother was Annie McGrath, sister of Patrick Joseph McGrath. Martin’s father, Michael Dermody, was a first cousin of Paddy and Richie McGrath. Martin is a fifth-generation printer, and he explains that most of Patrick’s sons went into the printing trade. Martin is of the opinion that his ancestors were admirable individuals because they operated from conviction. As far as he can tell, no resentment against the anti-Treaty side existed, though discussion about this never occurred. A photograph showing Margaret Pearse starting the press on the occasion of the printing of the first Irish Press newspaper is examined. Martin reads from Captain Michael Kilkelly’s statement supporting his grandfather’s application for a pension. Patrick McGrath retired from the Irish Army in 1925 and returned to the printing trade. Later he was headhunted by de Valera and was asked to name his salary. Michael Dermody, Martin’s father and nephew of Patrick McGrath, was also a printer at the Irish Independent. He would recall his first cousin, Richard McGrath, coming in on Bloody Sunday after the shooting and his father Patrick burning his clothes in order to dispose of the evidence.