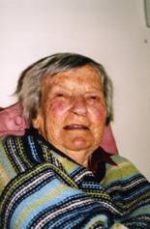 Mary Jones was born in Trim, County Meath. The family later moved to Skibbereen and Drogheda, and Mary attended boarding school in Bray. She later studied Household Management at Alexandra College, and having had voice coaching, would sing in various Dublin venues. She met her future husband, Brian Boydell at ‘The Old Head’ Hotel in Lewisburg and describes him as a “beacon of light, even in those days.” The couple married in 1944. They initially met Aloys Fleischmann and his wife Anne for coffee by arrangement in the Gresham Hotel in Dublin, and they quickly became firm friends. Brian and Aloys would talk music, and discuss at length the means by which they could improve the music scene in Ireland. Ideas crystallised during these discussions, many of which would subsequently come to fruition. The Boydell home became an open house for musicians, and a venue where Brian Boydell and Aloys Fleischmann would retire to the music room to work on compositions.