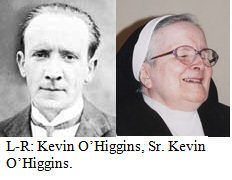 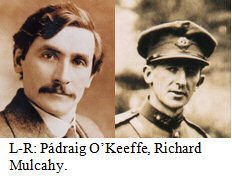 Track 1: Páidín O’Keeffe describes meeting Arthur Griffith in Paddy Gleeson’s drapery shop in O’Connell Street, Dublin, on Holy Saturday of Easter Week. He was told to attend a meeting of leaders of the Irish Volunteers at the home of Dr. Séamus O’Kelly in Rathgar that night. Having told his wife and family, he left home and when the meeting began, he was instructed to go and get Cathal Brugha, who was not in attendance. He was also instructed to deliver a dispatch to de Valera, which he later gave to Simon Donnelly with instructions to hand it to de Valera. Track 2: Contains a description of Páidín O’Keeffe’s order from Eoin MacNeill to cycle to the offices of the Sunday Independent that night, to alert the staff there of an important notice to be delivered before 3 a.m. on Sunday morning by Eoin MacNeill. Details are provided about meeting journalist Fred Cogley who agreed to delay printing until 3 a.m. Mention is made of his good friend, Pat O’Connor from Rathmore, Co. Kerry, who sent word to him that he would be coming to Dublin to take part in the Rising. On Good Friday, Páidín O’Keeffe, Pat O’Connor and some others met a journalist from Listowel named O’Sullivan, who told them that a wire had come from Tralee to say the Aud and her shipment of arms had been captured. O’Keeffe explains that O’Sullivan was anxious to meet Piaras Beaslaí so that this information could be publicised. Track 3: Contains a further discussion on the meeting of the leaders of the Irish Volunteers on the Saturday night at Dr. O’Kelly’s house, and a description is provided of the feeling of excitement at the prospect of an imminent Rising, though a lot of confusion still reigned. A detailed account of a second gun-running incident on the coastline at Kilcoole in Co. Wicklow, is provided. Track 4: An account is given of hearing the first shots of the Rising being fired, while Páidín was walking with his friend, Thomas Shine Cuffe, in the golf course in Churchtown on Easter Monday morning. Páidín O’Keeffe travelled to the GPO with Séan Hales and was instructed to go to Clearys, where he came under the command of W. J. Brennan-Whitmore. The surrender at the end of the Rising is recalled by Páidín O’Keeffe, along with his capture and the subsequent march to the Rotunda grounds, where they spent the night. He mentions that the British military shared their rations with their prisoners that night. The march to Richmond Barracks on the following morning is described. The subsequent arrival there of Richard Mulcahy, Tomás Ashe and Jim and Frank Lawless, is recalled. The later march to the North Wall is also recounted. Track 5: Contains a discussion on Arthur Griffith, his brief membership of the IRB and the antipathy towards him within that organisation. A brief discussion on Cork republicans follows. Páidín recalls a meeting with Liam Deasy while Deasy was awaiting execution at Mountjoy and he himself was the Assistant Military Governor. Track 6: Páidín O’Keeffe recalls his first meeting with P. H. Pearse in London in 1902, at a Cumann na nGaedheal meeting. He also met North Kerrymen Mick, Paddy and Jack Mulvihill in London at this time, and he describes them as being very bright and intelligent men.