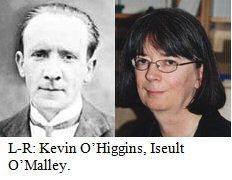 Track 1: Sr. Kevin (Maeve) O’Higgins describes her entry into the Carmelite Sisters in Blackrock in 1945 and she recalls, through the eyes of a child, a vivid memory of the day her father, Kevin O’Higgins, was shot in 1927. She also recalls the fact that she was placed in the care of her granduncle Tim Healy, first Governor-General of the Irish Free State, during the day of the funeral. During this recording, Sr. Mary Noeleen Slattery may also be heard. Track 2: The story of Sr. Kevin’s mother, Bridget Cole, a teacher from Dundrum in Dublin, is told. Her forgiveness of the assassins of her husband is recalled. An anecdote relating to an event during Sr. Kevin’s childhood involving her father is told. The shooting of her grandfather, Thomas Higgins, and the bravery of his daughter, Patricia, at that time is described, as is the effect of this shooting on Kevin O’Higgins. Track 3: The support of the O’Higgins family by the Irish Government following the death of Kevin O’Higgins is discussed. A photograph taken at the wedding of her parents at Whitefriars Street is examined, and mention is made of the wedding party on that occasion, which included bestman, Rory O’Connor. Her views on the executions during the Civil War are detailed. The demeanour and personality of her mother, Bridget, and the initial meeting of her parents while her father was on the run during the War of Independence, are described. Track 4: Childhood memories of a visit to Dublin Zoo with her father are described, and the artist, Sarah Purser, who painted a portrait of her mother, Bridget Cole, is also recalled. Track 5: Sr. Kevin recalls visits made to her by various interesting people at the enclosed Carmelite convent in Blackrock over the years. She recites the poem “I Vow to Thee my Country,” written by Cecil Spring Rice. Track 6: Contains a description of her mother Bridget’s premonition of the death of Michael Collins, and a discussion about Sr. Kevin’s feelings regarding Éamon de Valera.