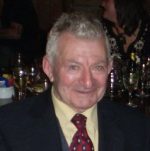 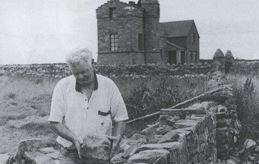 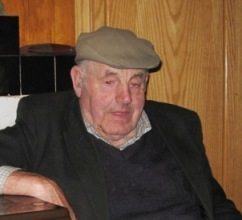 This recording is compiled in Carrowkeel or the ‘Coach Valley’ where Paddy Devaney and his wife Minnie provide details of their lives. Paddy was born on a small farm, of about two or three cows, in 1924. He recalls working with his father, cutting oats with a scythe before he eventually worked his way up to the plough. He remembers when his father bought a horse plough that it was a big investment for a small farmer at the time. Paddy worked with this plough until he was in his twenties and he explains how they progressed from ploughing with horses to small tractors. He explains that the tractor was difficult to accept for some farmers, who thought it made the ground hard, but it was eventually adopted once they saw that it did the same work as the horse. Paddy tells us he was ploughing in competitions until he was eighty-four years old. He discusses the whole process, from the initial ploughing to the sowing, the fertilisation and the shaking of potatoes into the soil. He describes how the potatoes were sprayed to prevent blight and weeds by using mixtures of bluestone and washing soda. Also discussed is the making of the trampcock and he remembers the market that was held once a week at which he sold potatoes and hay. Paddy remembers Sligo town in the old days, with the old buildings, narrow streets and no cars. Other topics discussed include the country house dances in the area, how people were matchmaking long ago and the deadly wind of 1961. Also recalled are memories of the straw boys and the wren boys of County Sligo.