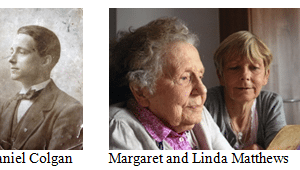 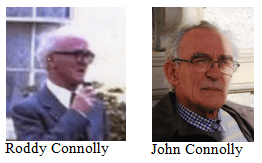 Pamela Casserly’s mother, Bridget Swanzy, married Thomas Casserly in 1923. He was a member of the Garda Siochána and he held the rank of Chief Superintendent. Bridget Swanzy’s sister Christina married Seán Connolly of the Irish Citizen Army. When Christina was widowed in 1916, she had three young children and no support was forthcoming from her own family. Pamela feels that this may have been due to her father or her grandfather ‘marrying out’, resulting in a break in the relationship with the rest of the Swanzys. She assumes that it was due to Arthur Griffith’s influence that Christina, her children and her sister Bridget went to live at 3 Mountjoy Square, the home of Walter Cole. Pamela explains that bedrooms in the house were for the use of Arthur Griffith and Eamon de Valera, and she remembers that her mother never really liked de Valera, relating an anecdote to illustrate this. Bridget’s brother, Patrick Swanzy, was in the Imperial Hotel during the Rising, and was interned in Frongoch. He was later involved in the burning of the Custom House with Piaras Beaslaí and was condemned to death, but the sentence was commuted. Pamela’s mother Bridget opened the door to Arthur Griffith when he returned to Dublin following the signing of the Treaty, and Pamela relates some remarks that her mother remembered from that time. The Swanzy family supported the Treaty. Her sister and brother were born in Mountjoy Square. She remarks that Michael Collins was remembered by her cousin Madge as being great fun, though de Valera’s personality was different. Pamela is researching her Swanzy connections and she discusses this research and its results. She recalls her mother learning Irish in Donegal from Sinead Flanagan, and discovering that the Swanzys were landlords in the northern counties. She discusses Patrick Swanzy, a brother of Bridget and Christina who became a master baker, and Pamela thinks that he supported the family. He and his brother set up a bakery on the North Strand which was destroyed by the German bombing of WWII. Later, Patrick worked as a chef on the Queen Mary. Pamela recalls her mother’s attitude to and dislike of de Valera, particularly in view of the fact that a democratic vote had been taken on the Treaty. Pamela has a photograph of her mother, who taught at Seville Place, her father and aunt on the roof of Jacob’s Factory. They disapproved of the non-acceptance of the Treaty and considered that the outbreak of the Civil War damaged the reputation of the twenty-six counties in Ulster. Pamela does not think that her mother was active after 1916, though she may have been working in the background. She relates an anecdote about her father’s attempts to keep the peace at election time in the early 1930s and the dangerous situation for the family at that time. Her father was targeted because he would not allow the disruption of election meetings. She discussed this episode with her mother years later, and she explains that Bridget had had earlier experience of such situations during her time in Mountjoy Square. She recalls the fact that after Seán Connolly’s death there was little connection between the Swanzys and the Connollys, possibly because of differing political views. Walter Cole of 3 Mountjoy Square was her brother’s godfather, but she herself has no memory of him. She discusses notes kept by her cousin Madge about her childhood which she found interesting as they feature her father as a younger man. Thomas Casserly joined the force as an inspector and six months later was promoted to superintendent. A bronze figurine given to Thomas by members of the LSF after the Emergency is remembered. She recalls her father’s death and his funeral. She explains that she visited 3 Mountjoy Square at one time and in the hallway there hung a photograph which she was able to identify as her parents’ wedding photograph. In conclusion, some family memorabilia is examined.