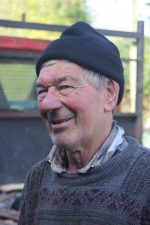 Tubbercurry in Co. Sligo is where Peadar O Naraigh was reared. in 1966 following his training as a toolmaker, he was employed at the shoe factory in Belturbet. He later set up his own business in a disused station house in the town. He speaks about his twin passions of the Gaelic language and the game of hurling. In 1969, he participated in the civil rights marches, was a supporter of Sinn Fein, and helped to ensure that the main road at Ballyconnell was kept open. He recalls the victims of the Troubles who lost their lives in the area around Ballyconnell, and also states that he was imprisoned in Portlaoise for four years, having been found guilty of producing shells for rocket launchers. He mentions the support he received from some local people and the character reference supplied by Fr. Fintan McKiernan, which helped to reduce the term of his sentence. Peadar explains that he has not been involved with Sinn Fein for quite some time and that many of his business customers are of the Protestant faith.