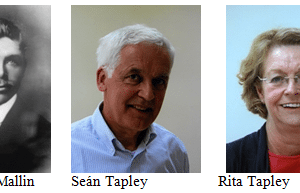 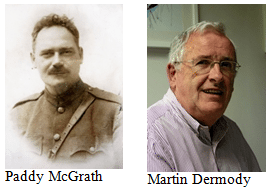 Pearl Finnegan explains that Seán Mac Diarmada was her father’s first cousin. Her paternal grandmother was a member of the McMorrow family, and was a maternal aunt to Seán Mac Diarmada. Mac Diarmada was the national organiser of the IRB. He was a member of the Ancient Order of Hibernians, the Gaelic League and later Sinn Féin. As a youth he contracted polio and was to suffer greatly from its effects. Pearl explains that when he left the family farm he went to join his brother in Scotland, later moving to Belfast where he met Bulmer Hobson and other nationalists. He worked as a journalist there and came to prominence in nationalist circles. His father was a carpenter by trade and the family owned some land near Kiltyclogher in Leitrim. Seán had five brothers and five sisters, and some of his siblings had emigrated to the USA. He was to visit there to fundraise on several occasions. Pearl feels that Seán was imbued with a strong sense of nationalism, having come from a poor part of the country with a long history of emigration. Pearl understands that in the eyes of the people of north Leitrim, the Rising was a failure and should never have taken place. She recalls that in the week that Seán Mac Diarmada was executed, the editor of the Leitrim Observer wrote a scathing article about those who encouraged the rebellion, writing that it was fitting that the executions should take place. The McMorrows, her paternal family, never spoke about the matter. Her father, Myles McMorrow, was a member of the Garda Siochána when the Free State was founded. Pearl reminds us that Gardaí did not have the voting franchise up to the 1970s, and her father could not be seen to be political. She did not become aware of the association with Seán Mac Diarmada until the 1960s, when her father gave her a wedding gift of a framed copy of the 1916 Proclamation and told her about his relationship to Mac Diarmada. Pearl remarks that this period of Irish history was never touched upon in school. She reflects on her father’s attitude towards his cousin’s role in the Rising. She recalls her family home and the items her father had kept in a locked trunk. Following their retirement, her parents moved house several times and the contents of the trunk seem to have been dispersed. Pearl explains that after her marriage she became aware of national politics due to the milieu in which she moved. In her family home there had been no talk of politics, and she knew very little about Ireland’s political history. In her childhood home in Ballinasloe, the Mac Diarmada family had never been mentioned, possibly for reasons of the negative publicity in Leitrim and also because of her father’s career. She says that an air of secrecy existed in the family which may have arisen from feelings of perceived failure, and the publicity given to the families of the executed leaders of 1916. She explains that when Mac Diarmada contracted polio, he stayed with the Mitchells in Athenry and he was arrested in Tuam for carrying a gun. He also stayed with the Ryan family in Limerick. She reflects on Mac Diarmada’s preoccupation with secrecy and informers. Apparently he felt that in order for the Rising to succeed secrecy was crucial, and not all of the leaders knew as much as he did about the plans. Pearl discusses the issue of the Countermanding Order, saying that it appears that the actual order did not come through Seán Mac Diarmada. She mentions two relatives who may be able to give some further information about the McDermotts and the McMorrows. At the time of the 50th anniversary of the Rising, Pearl had four young children and was involved in her new business, but now she is very interested in her family history and hopes to take part in the forthcoming centenary commemorations. She describes the process in 1966 when relatives were invited to a function in Dublin. Mac Diarmada’s nearest living relative, his sister Rose in Leitrim who had been given Seán’s 1916 medal, turned down the invitation. The reasons for her decision are explained. This created a difficulty for the organisers, as Seán Mac Diarmada had been a signatory of the Proclamation. Pearl describes the events that took place in 1966. The McDermott family home has now been taken over by the State and is open to the public. Pearl remembers seeing the old homestead for the first time in the 1970s. The Seán Mac Diarmada museum is located in the old courthouse in Kiltyclogher. The Seán Mac Diarmada Summer School is also discussed. Her hope is that the men of 1916 will be honoured in a respectful way in the centenary year of 2016.