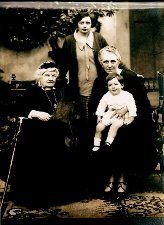 Track 1: A discussion on the Lovell family at Abbey Mahon, and their ground rents in Cork city. The Lovells at Brinny and Kilpatrick, and Rex Lovell’s inheritance of the farm at Abbey Mahon. Track 2: Thomas Lovell was the first of the family to come to Abbey Mahon, having purchased it from the Hartnetts. Rex reads from old Deeds. An account of farming 100 acres in his father’s time, and horse-breeding. Track 3: Erica and Rex Lovell speak about growing up on the farm during the Emergency period. Track 4: Rex’s wife, Helen continues to read from old Deeds. Track 5: Rex talks about his siblings and their occupations. Helen discusses her family, the Wilcoxes, and describes her time teaching in a grammar school in Bandon for seven years in the 1960s. Track 6: Rex’s ‘Victorian’ upbringing as his father was born in 1891. The Troubles and the tensions felt by the Protestant community in the area at that time. The participation in World War I by his mother’s brother. Track 7: Where the family stood during the Troubles, and how they protected their land and property. Track 8: A discussion on sport, hunting, point-to-point racing and hockey. Track 9: Readings from a letter written in 1926 relating to draining of the land.