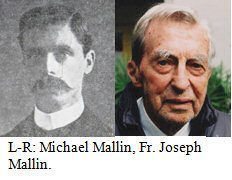 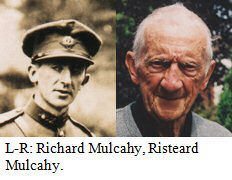 Track 1: Risteard Mulcahy recalls his father, Richard (Dick) Mulcahy, and his work in recording his contemporaries from the 1916-1923 period following his retirement from politics in 1961. (These audio recordings now form part of this Irish Life and Lore 1916 Rising Oral History Collection.) Risteard explains his belief that the Rising in 1916 was a great mistake. He discusses his father’s role in Ahsbourne, Co. Meath, and his refusal in the 1950s to attend a memorial ceremony there. Track 2: Risteard Mulcahy’s mother, Mary Ryan, is recalled and a discussion follows on her family who were also involved in the Troubles. Mary Ryan and her sister, Phyllis, were out in 1916 and their roles at that time are explained. Track 3: Richard Mulcahy’s interest in gathering information about the 1916-1923 period from his comrades following his retirement in 1961 is recalled. Track 4: The background to the Mulcahy family in Thurles, Co. Tipperary, is described, and the fact that all the Mulcahy children were educated in the Irish language is discussed. Track 5: The 1966 Commemorations are recalled, along with Risteard Mulcahy’s view that his father’s legacy was overshadowed by that of Michael Collins. The perceived failings of Collins are described. Track 6: The Sinn Féin Dáil and Richard Mulcahy’s determination that the Irish Army would be subservient to parliament are mentioned. Risteard Mulcahy’s childhood memories are recalled. Track 7: Following the Civil War, Richard Mulcahy never carried a gun, nor did he ever need protection, explains his son.