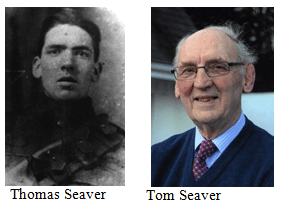 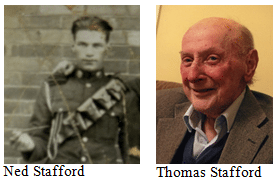 Thomas Peppard was born in the Rotunda Hospital in Dublin and lived with his family in Brunswick Street before moving to Lusk at a young age. He was taught by Thomas Ashe at Corduff National School during his early years. He worked at one time for a well-drilling company and was able to acquire dynamite because of his occupation. The horse farm in Lusk which was the place of employment of Robin Bollard’s paternal grandfather, John Bollard, is recalled and Robin tells a story involving his maternal grandfather, Thomas Peppard, and some others, who were at one time sent to rob the payroll at the farm. Robin explains that in the 1950s his parents were courting, and his mother visited Rush to meet the Bollard family. During the conversation on that occasion, the robbery at Remount Farm was discussed. Robin has pieced together details of his grandfather’s activities in 1916 through information he has acquired from others. Thomas Ashe drilled the men with hurleys, and Thomas Peppard was at Howth for the gun-running though he did not get any weapons. It was his job to mobilise the men from the area at a place in Swords. When the demand for reinforcements came from Dublin at Easter Week, Thomas was one of those who went to Ussher’s Island on the Tuesday. When the men were attempting to get to the Mendicity Institute, they discovered a British soldier hiding in a garden, and he was arrested and brought into the Institute. When Seán Heuston surrendered, all the men were arrested and brought to Arbour Hill, and following court martial, Thomas was sentenced to death (later to be commuted to penal servitude for life). He was incarcerated in Portland, Lewes and Pentonville prisons. In prison, classes in Irish and in other educational pursuits were established. Robin says that Thomas did not speak much about this period in his life. Thomas was a supporter of Michael Collins and was later to join the Free State Army, and Robin discusses the diaries he kept for 1922 and 1923. He retired from the army when his wife developed a serious illness, and was appointed steward at Tallaght airfield, where the army horses grazed. Robin reads some pages from the diary which indicate that his grandfather was involved in investigating incidents around the Dublin area. He also trained recruits to the army and had a reputation for being strict, which corresponds with Robin’s memory of his grandfather. Robin has his grandfather’s service gun which has been decommissioned, and among his late grandfather’s possessions, now in Robin’s keeping, is an RIC baton which had probably been taken from a policeman. Robin’s mother was an only child and he explains that his father, Robert Bollard, was a supporter of Fianna Fáil. Robin recalls his grandfather at election time talking about the recklessness of Fianna Fáil’s financial promises. He is recalled as a very disciplined man whose knowledge of Irish was excellent. He would travel everywhere by bicycle, both to work and to political meetings. Photographs and documents are examined, and Robin reads a postcard from Thomas Ashe written while he was in Clare. Thomas Peppard’s three medals are distributed amongst his grandsons, Robin explains. Thomas Peppard was heavily involved in the War of Independence and he was at the top of the Black and Tan hit list at one time. Robin remembers that Thomas pointed out safe houses to him while they were on driving trips. He tells an anecdote about a time when his grandfather escaped capture, and says that for about two years he had been unable to come home. He travelled by bicycle, accompanied by his Jack Russell terrier who was useful as a watchdog while he slept. A suspected informer, a former British soldier, is recalled. The document which granted Thomas Peppard a Military Service pension, paid from October 1924, is read by Robin, as also are details of his qualifying service in Óglaigh na hÉireann and Óglaigh na hÉireann Defence Forces over various periods. Thomas worked at the Defence Forces farm at Tallaght until 1956, and on retirement he lived at Rush with the Bollard family until his death in December 1984. Though Thomas Peppard had been a supporter of Michael Collins, he expressed the wish that he did not want a military funeral while the six counties were not part of the Republic. Robin discusses his attendance at the 1916 commemorative events and he says that Thomas Peppard is remembered fondly by his grandchildren.