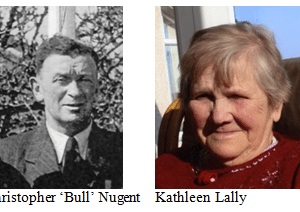 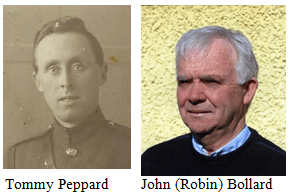 Tom Seaver discusses the origins of the Seaver name and the family in Ireland, and explains that about seven generations can be traced back to the 17th century. His own ancestors were farmers in Rallekaystown. His father, Thomas (known as Tommie), had four brothers and four sisters, and some of the brothers were involved in the 1916 Rising. Michael was a helper to Thomas Ashe and was known to the 5th Battalion. When the battalion came looking for Michael on Easter Monday and found that he was absent, his brother Tommie went with them. Their mother, Mary Anne Troy, had married Thomas Seaver at age17. Thomas Ashe taught in Lusk and introduced the Gaelic League. Irish language and Irish dancing classes were attended by Tommie and Mick Seaver. Tommie worked in Peter Kennedy’s Bakery in Great Britain Street, (now Parnell Street) in Dublin, and was a colleague and friend of Con Colbert who worked in the office there. Tommie’s second son Cornelius was named after Con Colbert. Tommie joined the 2nd Battalion, where his friends were Leo and Theo Fitzgerald, Éamon Price and Joe Larkin. He lived in Sandymount and Tom reads from a letter written by his landlady when he was probably in Knutsford Prison. Richard discusses the lead-in to the Rising and what the men were told, and he explains that Tommie was very religious and attended Holy Week services as normal at this time. Rumours which circulated about the German arms expected in Kerry are recounted. When news of Eoin MacNeill’s Countermanding Order became known in the city, Tommie decided to go home to Lusk for the weekend. His friends there had not heard of the countermand and he told them about the latest turn of events. Tom recalls the people whom Tommie visited at home and also at Skerries at this time. Some of his friends were going to the races at Fairyhouse on Easter Monday but he decided not to accompany them. On Easter Monday, three Volunteers came looking for Mick who, along with their younger brother Kit, was a member of Fianna Éireann. Mick was working on another farm on the day, so they asked Tommie to come along with his rifle to the bandroom in Lusk. There, Father Hoey was hearing confessions and Ned Rooney was in charge. The orders from Ashe were to meet up with the contingents from Swords and Donabate, and at the meeting point Ashe delivered a rousing speech. Tom describes their activities over the following days as they attacked various barracks, and also their destruction of the railway. Tommie was 20 years of age at this time, and was one of the rank and file. Tom reads from one of Tommie’s letters written from Frongoch Camp to his sweetheart, Mary Farrell. He explains that Thomas Ashe brought together several groups into the 5th Battalion, including Tommie Seaver. At this stage Tommie was part of the group at Ashbourne. The role of Richard Mulcahy in the Battle of Ashbourne is discussed and Tom explains that after the victory there, Ashe apparently told the surviving policemen that they would be needed when a police force was required in the independent state. Tom reflects on the way in which he gathered historical information over the years from people such as Jack Hynes and his own mother, and he continues the account of events after Ashbourne. Dick Mulcahy was sent into the city to discover what had happened there, and he learned that Pearse had surrendered. On his return he was captured, and along with the others was accompanied by a detachment of Lancers to Richmond Barracks. Tommie Seaver was released from Frongoch in December 1917, and he later returned to work at Kennedys’ Bakery in Dublin. His son is not aware of his whereabouts between 1918 and 1921. During this time Tommie was still a Volunteer and was probably a ‘sleeper’ who would be available if required. Tommie was a De Valera man all his life, though Tom is certain that he took no part in the Civil War. He reflects on his father’s cultural activities, particularly his singing for which he won several prizes. In his late thirties he wed Ann Brady from Ballyknocken in Co. Wicklow, who came from a republican background. Tom remembers his father’s trip to O’Connell Street in Dublin in 1941 for the 25th anniversary of the Rising. He reads a letter about people who claim that men were inadvertently captured following the 1916 Rising. His thoughts are now on the manner in which the victory at Ashbourne will be marked during the centenary year.