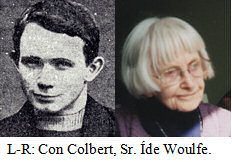 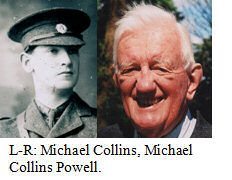 Track 1: The Colbert family of West Limerick is described by Con Colbert, and he recalls his childhood visits to the family farm in Athea. He also provides details of his uncle Con Colbert’s movements during the 1916 Rising, along with details of his early influences. Track 2: The arrest of Con Colbert and his sentence to be shot in Kilmainham Jail are recalled. His nephew reads from two letters written to his family by Con Colbert while he was awaiting execution. Con Colbert (interviewee) recalls his father, Jim Colbert’s imprisonment at the Curragh Camp and his escape therefrom. He also remembers his mother, Tuam native Rose Ryan, who was imprisoned in Kilmainham Jail during the Civil War. Track 3: Extracts from a report written by a Capuchin priest, present at the execution of Con Colbert in Kilmainham, are read, and the interviewee stresses the importance of the Colbert name to him personally. Jim Colbert, father of the interviewee, was a Sinn Féin TD (later Fianna Fáil TD) for Limerick, elected in 1923. His support for Éamon de Valera is recalled, as is the interviewee’s mother’s views about him. Track 4: A story told to him by his mother is recalled, describing the visit of Countess Markievicz to Athea in 1917. He also recalls the 1916 commemorations through the years, particularly those which occurred in 1966.