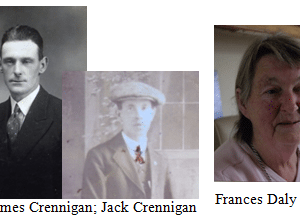 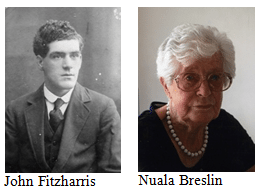 Tom Fleming explains that his grandfather, Thomas Fleming, was a small farmer in Shillelagh, Co. Wicklow. He also had other employments and he remained active in politics after the Rising. He had two sisters, Catherine and Dorothy. The interviewee, Tom Fleming Jnr. knew both of his grandaunts. Catherine “Kit” Fleming worked in the Irish Civil Service and her sister Dorothy “Dot” married Joe Lawless, Commandant in the Irish Army. As a family, the Flemings appear to have been republican orientated. Tom’s wife Marie explains that the Fleming holding in Shillelagh had been taken by the landlord, and Tom continues that the family moved to Drumcondra where they had a shop. The Flemings purchased guns. Tom’s uncles Mick and John Fleming are remembered. Tom’s father, civil engineer Michael McDonagh Fleming, is recalled, and Tom remembers some of the works he oversaw and the roles he held in Local Government. He regrets that his father never shared any family memories, and explains that it was important to him to be seen as apolitical in his role as a civil engineer in Local Government. Kit and Michael Fleming’s pension applications are mentioned. Tom had four relatives who were involved in the Rising in Dublin, and he says he did not realise the extent of this involvement until after his father’s death. Marie examines some photographs relating to the commemoration of 1798, and Tom discusses a group photograph which includes his grandfather, Thomas Fleming. Dot and Kit Fleming were members of Cumann na mBan during the Rising. Tom stayed at his grandaunt Kit’s house while he was a student in Dublin, and he recalls her as being dogmatic by nature. Marie also remembers visiting Kit’s home. Kit’s brother Michael, who was unmarried, lived with her until his death in the 1960s. An autograph book kept by Michael Fleming at Botanic Road, Glasnevin is discussed. Marie recalls her grandmother, Louisa Flynn, who was a member of Cumann na mBan and was in the GPO in 1916. She reads a letter to Mary Leahy, the first wife of Thomas Fleming, sent from Frongoch Camp, and Tom discusses a photograph of his grandfather with some members of the Civic Guard. Marie recalls her father-in-law, Michael Fleming. Tom discusses the McDonagh name which is now part of his family, though there is no family relationship with Thomas McDonagh. After his father’s death, Tom discovered his archive of material which included his grandfather’s medals. Marie remembers Michael’s shillelagh which had been converted to a swordstick, and she says that this was the first inkling they had about their family’s activities during the Rising. Hugh Beckett, civilian archivist at the Military Archives, retrieves the digital pension application files of Michael, Thomas and Dolly Fleming. Tom reads his grandfather’s file, and it becomes evident from this account that he was very involved in the acquisition of guns and ammunition. Tom reflects on his pride in his grandfather following his first reading of this document. He recalls his mother’s family, the McCarrolls of Wicklow, explaining that his maternal grandfather was State Solicitor. He reads from a document concerning his grandfather Thomas Fleming’s part in the Rising. Hugh Beckett explains that Thomas was with C Company 2nd Battalion Dublin Brigade in north inner city Dublin. Tom describes Catherine Fleming’s involvement with Cumann na mBan from his examination of her pension application, a portion of which he reads aloud. He explains that he is the last in his line of the Fleming family. He discusses the archival material collected by his father and says that it is important to him that these items remain in Ireland for public access. Commandant Pádraic Kennedy of the Military Archives speaks about the historical importance of family material such as that of the Fleming family, and its huge benefit to researchers at the Archives.