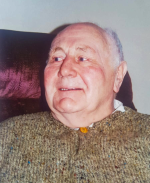 Tom Halpin grew up in Dublin, and joined the Guinness brewery firm at 15 years of age. He worked as a laboratory assistant, and for years won first prize in competitions for chemical analysis in the brewing industry. Tom moved to Kilkenny in 1967 and joined Smithwick’s brewery. He lived in Vicar Street and later moved to Steven Street, previously known as Orphanage Lane. Tom has written extensively on the history of the brewery, and spoke to me about all aspects of its activity. In this recording other smaller breweries, which used to exist around the country, are recalled.