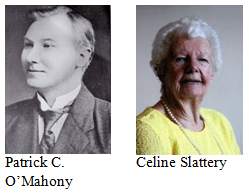 Tom Slattery explains that the Slattery family came originally from Germany to Co. Clare. His grandfather, Thomas Slattery, was a farmer who owned several premises on Rock Street in Tralee and was a member of Tralee Town Council. The farm was later divided between his sons Thomas and John. Tom details his grandfather’s role in early GAA affairs in Kerry. He became very involved in the struggle for national independence and was arrested in May 1916 because of a connection to Roger Casement. He was taken to Richmond Barracks, court-martialled, sentenced and transported to Frongoch in Wales. He was released in the summer of 1917. The nationalist activities in Tralee leading up to the Easter Rising are described. Thomas Slattery was opposed to conscription. Tom’s father, also named Thomas, joined the Irish Volunteers at this time. Tom explains that, while held at Crumlin Road Jail in Belfast, his father went on hunger strike. The Black and Tans targeted the premises in Rock Street, Tralee which led to the family having to return to live on the farm. Tom details the mistreatment suffered by his father and grandfather at the hands of the police. He explains that his father was captured at Abbeydorney near Tralee by the Black and Tans. He would later rarely speak about his part in the struggle. The connection with Fionán Lynch, who was Tom’s uncle by marriage, is explained. The visit made by Michael Collins and Emmet Dalton to pay their respects on the death of Thomas Slattery Snr. is remembered, and Tom tells an anecdote relating to this visit. He considers that his grandfather was an amazing man. He had four daughters for each of whom he provided a dowry of £1,000 in 1921. He strongly believed in the value of education for his children. Tom recalls the ‘Dandy Six’ and examines a photograph of four of these men which include his father. Both his grandfather and his father supported the Treaty, he says, and he explains that Tralee was an anti-Treaty town. ‘The Dandy Six’ left Tralee and joined the Free State Army. Tom remembers that his father made his way from Ballylongford to visit his ill father, and he feels that his father was fortunate to have been appointed to a pro-Treaty area. A letter written by his father to his sister while he was on hunger strike is recalled, and Tom reads some entries from his grandfather’s diaries. A photograph taken at the unveiling of the statue of the Croppy Boy in Tralee by his grandfather is discussed. Tom attended the unveiling as a 7 year old and he remembers seeing Maud Gonne McBride. He discusses a photograph of the released hunger strikers in Belfast which includes his father and his cousin John Slattery. Tom discusses the events surrounding Roger Casement’s arrival at Banna Strand in 1916. An incident which occurred during WWII and which involved his uncle Christy O’Sullivan, who served with the FCA in Tralee, is recalled. Tom describes the guns that had been hidden in the public bar which had been a meeting place in 1919 and the 1920s. He also discusses some documents in Kerry County Library in Tralee relating to his grandfather and Maurice Moynihan. He reflects upon the role played by sport in bringing the pro and anti Treaty sides together. He recalls accompanying his father to his uncle Frank’s last rugby game. Tom says he was suspended from playing GAA for attending a rugby match, and he played rugby from then onwards. The visitors to Tom’s childhood home are recalled, as is the shooting of Maurice Reidy in Ballydwyer near Tralee. He speaks of his pride in his grandfather and his father. He and his father were both very active in the Fine Gael party. Though retired from active politics he retains a strong interest. His father Thomas, who died in 1963, received a military service pension and was also the pension officer when the pension applications were being processed. Tom recounts an anecdote relating to the IRA pension. He recalls the commemorative parade in Denny Street, Tralee in 1966. His uncle Christy O’Sullivan led the Army parade on that day.